Hamtramck voters do a replay of the 2008 election 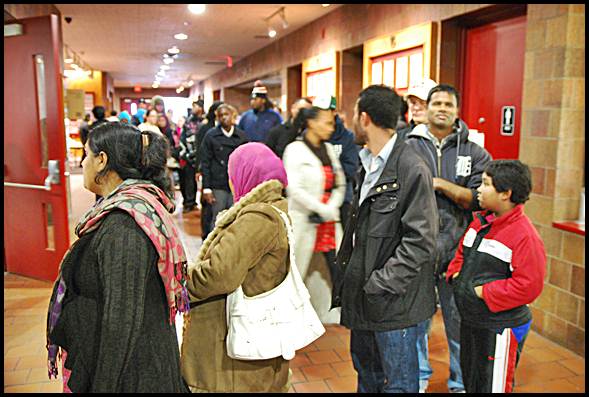 Over 5,000 voters turned out in Hamtramck on Tuesday. The longest wait to vote was about one-and-a-half hours.

Just like in the 2008 presidential election, Hamtramck voters came out in droves last Tuesday.

And also just like in the ’08 election they gave their support to Barack Obama.

Over 5,000 voters hit the polls Tuesday (the exact number was not known at press time), and they overwhelmingly supported President Obama in his re-election bid.

That’s certainly no surprise since Hamtramck has long been a Democratic stronghold.

Voters here differed with voters statewide in their support for state proposals 2, 3 and 4. Statewide, all six state proposals were rejected, including one that would uphold a new emergency manager law.

Unlike some other cities in the metro area, voting went relatively smoothly. The longest wait to vote was about one-and-a-half hours. There was also some confusion by voters who opted to vote absentee but showed up at the polls to vote in person.

In those cases, said City Clerk Marie Kendzierski, the absentee ballots were taken away and considered spoiled. Voters were then allowed to vote again.

Because of the large turnout and lengthy ballot, the Hamtramck results weren’t available until about 3 a.m. the next morning.

At most precincts, a steady stream of voters turned out all day. Here are some tidbits from Tuesday:

Walking into the Hamtramck Senior Apartments to vote was Nancy Teatro who was quickly approached by an Obama campaigner. She waived him off, saying: “I’m Obama all the way.”

And that summed up how Hamtramck voted.

Sitting on a planter at Belmont and Jos. Campau was a long-haired hipster who would only give his first name, Aaron. He was holding a handmade sign that said: “Hail to the thieves 2012.”

“The election has been bought and paid for,” he said.

Aaron said he supported Obama in ’08, but became disenchanted.

“I learned more and more and it’s special interests that run the government,” he said.

He also opposes Obama allowing the use of military drones.

As for politics, Aaron, even at age 21, is cynical.

“I have no faith,” he said. “The only faith I have is for the people. That’s who I am trying to reach out to.” 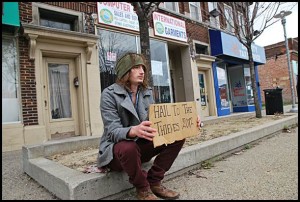 Not everyone in town was pleased with President Obama. Former Obama supporter, Aaron, showed his frustration with the election process while sitting on a planter on Jos. Campau and Belmont.

Although Hamtramck is heavily Democratic, we do have some Republicans here (a little over 500 voted for Romney). Take Ibrahim Aljahim, an immigrant from Yemen. You’d think that like most immigrants, he would be solidly Democratic, but not so.

He said he voted for Romney because “we need a businessman in the White House.”

He also doesn’t think much of Obama’s foreign policy.

Over at Baker’s Streetcar Bar on Jos. Campau, Dan McIlhiny from Dearborn was sipping a beer and expanded on a litany of reasons why Obama should not be re-elected. According McIlhiny, Obama has lied, failed economically and botched the Benghazi embassy incident.

And that was just warming up.

“Morally, Romney knows what’s good for the country,” he added.

But down at the end of the bar Archie Mendalski was having none of it.

“When you’re drinking, you don’t want to hear anyone’s opinion,” he said.

But that didn’t stop McIlhiny from opining.

“Get out of here before you get in a fight,” Mendalski snarled while McIlhiny talked on.

And that was a snippet from election year 2012.