Hamtramckan is an eye-witness to the Ukrainian refugee crisis 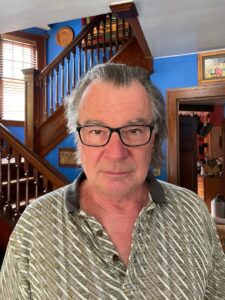 By Alan Madlane
There are those who talk about taking bold action.
Then there are those who actually see a bad situation, and then throw themselves into it, to try to fix it.
Hamtramck resident Stephen Pobutsky is one of the latter: a man who saw what was happening in Ukraine, who knew he had some of the necessary tools to be able to help Ukrainians caught up in all the misery happening there.
He set his American life aside to fly to Poland, near the Ukrainian border, and offer what help he could.
He has returned to Hamtramck, and he shared his experiences.

The Review: Can you give us a very brief biography of yourself up until this year?

Stephen Pobutsky: I lived in Hamtramck for 30 years, and worked for the public schools a total of 10 years (teaching ESL). I’ve taught at Wayne State University (Linguistics) since 1995.
When I first moved here, in 1978 or 1979, I had to get a parking permit for my neighorhood, and the guy at the city office said, “Pobutsky, that looks like a ‘Halychyná’ name, to which I responded, “What’s Halychyná?” and he replied, “You know, Halychyná — I’m from there.”
I now know that’s Western Ukraine, with its medieval capital Halych, where I have relatives (with whom contact was strictly limited by the Soviet regime). “Halychyná” would be “Galicia” in Polish.

The Review: How did your family, friends and relatives feel about you going to Poland? Did you hear from any current or former students before you left – had you told them during the school year that you were going?

Pobutsky: My family was supportive, especially my son, Alex (whom many may know as Martin). My sister told me, “Promise me you won’t go into Ukraine; they’re at war,” but I wouldn’t promise. And I did venture there (to Halychyná).
I have family roots in Hamtramck. My grandfather (same name) was pastor of the old Immaculate Conception Church on Grayling St. back in the 1920s. My aunt, Olga, was born in (the building that) is now City Hall.
The Ukrainian Archives and Museum in Hamtramck (of which I am now a Board Member) provided an initial contact; Dr. Andriy Dzul (also a Board Member) had worked as a volunteer through St. Clare of Montefalco Church in Grosse Pointe.
The Catholic Church in Poland had set up various refugee centers in Przemysl, Poland, and since I speak Ukrainian and Russian, I thought I could be of help as an interpreter. I will be giving a talk at the Ukrainian Archives and Museum, in November, in conjunction with others, on this topic.

The Review: Was there any one thing specifically that prompted your interest in the Ukrainian refugee situation in Poland? What, if any, prior connection did/do you have to it all?

Pobutsky: The war, obviously. I was appalled and outraged; still am. The brutality and the lies. Unprovoked missile attacks, the destruction of Mariupol. It’s state terrorism. And the world must stand up against it, without question.
I have a Ukrainian friend who was teaching English in a college in Irpin, near Kyiv. I visited her there once, years ago. Places where we had walked together, college buildings, are now piles of rubble. I had to help, somehow.

The Review: Tell us about your initial time there, and reaction to the situation and to the things you witnessed? Where you landed and then were stationed, etc.?

Pobutsky: I had first traveled as a student to Krakow, Poland, back in 1982. I received a scholarship to study in summer language classes at the Jagiellonian University through Wayne State University.
I flew there in July, and, although it’s changed considerably, it’s still a charming and vibrant city. From there, I traveled by train (which is excellent, by the way; why can’t we have decent rail service here?) to Przemysl, which is located in the southeastern region of Poland (another charming city), bordering Ukraine.
There, I stayed in various refugee centers — kind of dormitories –and hotels. That area is not being visited by Polish tourists with the war raging across the border, so the church has set up refugee centers throughout that region.
By the way, I was pleasantly surprised that I could still speak some Polish, and was able to get by rather well.

The Review: What duties did you undertake while you were working there in Poland with the Ukrainian situation?

Pobutsky: Essentially, I was working as a translator. I worked with doctors who were stationed at the refugee center, and was part of a small roving team of volunteers headed by an oral surgeon from upper Michigan, Dr. Osetek.
He came out of retirement to help along, with his wife, Beverly. Many refugees fleeing the war in Ukraine (mostly women and children) had not had dental check-ups before their hasty departures, and some had begun to have dental problems. So, we moved around to various (beautiful) locations in the mountainous southeasternmost corner of Poland, treating (mostly) children, many of whom received U.S. dollar bills from the “Zubna Feya” (tooth fairy in Ukrainian).
I also helped with transportation. I, and another volunteer, drove a refugee family (a woman and five children) across Poland, Germany, and into France to a resettlement center. I didn’t have time even for a café au lait — we just turned around and drove back.

The Review: Did you have a plan in place for exactly how long you would stay, or when you felt OK leaving Poland to return here to Michigan?

Pobutsky: My plan was to stay and work in Poland. I did venture into Ukraine for a little over a week (to Halychyná!), and visited my relatives. I had to take cover twice in Lviv (West Ukraine) when the air raid sirens went off.
My cousin has a shelter set up in the basement of his apartment building in Halych. I had to pass roadside checkpoints with antivehicle crossbars in the road, and there are captured “Ruzzian” tanks on display in the center of Lviv.
At the pedestrian crossing into Ukraine, near Przemysl, I decided to speak in English to the Passport Control Guard; when she asked “Where are you going” and I told her, “Lviv, Halych, Ivano-Frankivsk” these customs officers asked, “If you’ve come here to Ukraine, then how come you aren’t speaking Ukrainian?” which helped to dispel some of my nervousness.

The Review: What is your assessment of the situation overall – were you able to communicate with any of the refugees from Ukraine, and if so, what did they talk to you about?

Pobutsky: Of course, I was able to communicate with them. But there is one negative aspect, a linguistic one. Whenever I encountered any refugee for whom I was to translate, I would ask, “Do you want me to translate Russian or Ukrainian?” and many would reply, “Ukrainian, we’re Ukrainians” but then they would begin speaking in Russian.
There exists a kind of dialect, known as “Surzhyk” or “chaff” that is neither good Russian nor Ukrainian, but a kind of mixture, and that is what many people especially from the East speak.
They did relate their experiences, some harrowing. One family told how they had to escape their home in a Black Sea resort town with Russian artillery and opposing Ukrainian fire arcing overhead, dodging bomb and missile fragments in the road. The mother’s teenage son (who rather stoically endured having his tooth pulled) had (along with his pals) painted “Shatorsk (their town) is Ukraine!” on a fence in clear view of the “Ruzzian” forces one night.
We rescued, and ended up housing, a blind couple who just turned up at the Przemysly train station (quite intelligent people, who spoke excellent Ukrainian). There, I also encountered a guy from New Jersey, with no connection to Poland or Ukraine, who, when the war started, just quit his job and headed to Poland.

The Review: Do you feel like you might want, or need, to return at any point? What would make you change your mind, yes or no?

Pobutsky: Undoubtedly, I would return.
I’m already inquiring into other possibilities to help. Anyone interested in contributing or helping may contact the organization Stand With Ukraine. Also, Immaculate Conception Church in Hamtramck has a fund to help refugees and the war effort.
Additionally, people have been donating military supplies through a warehouse space in Hamtramck.

The Review: Are you glad that you went? Are you pleased personally with what you were able to help accomplish over there?

Pobutsky: Yes, of course, but I wish I could do more. My personal contributions seem so small, and the devastation is so vast. It will take a huge effort to rebuild Ukraine; of course “Ruzzia” should pay for war reparations after the Ukrainian Victory, but so much is needed.

The Review: Any last thoughts we haven’t covered here?

Pobutsky: It became clear to me, as it has been true since this conflict arose in 2013 (and when the war actually began, with the illegal annexation of Crimea in 2014), that Ukraine wants to be a part of Europe (the geographical center of the continent is in Halychyná) and the European Union.
Ukrainians work in Poland, Germany, France, and can see a better standard of living, decent wages, excellent infrastructure, so of course they want that for themselves.
What does “Ruzzia” offer? An arrogant kleptocracy, run by absurdly rich oligarchs, corruption on an epic scale across eight time zones, extermination of the Ukrainian culture and language? Gulags?
Ukraine has a democratically-elected president (Zelensky won by a landslide on an anti-corruption platform). Since independence, they’ve had five presidents, that’s what “Putler” (Putin) cannot tolerate. He wants to be surrounded by stooges and other dictators like in Belarus, Kazakhstan.
A western-leaning democracy on his southern border — where people lead a better life — is Putler’s worst nightmare.