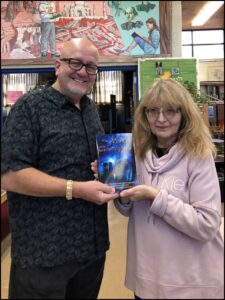 Hamtramck’s Al Ulman poses with Hamtramck Library Director Tamara Sochacka with a book he recently wrote about magicians. Ulman, who goes by the stage name “Al The Only,” donated his book to the library.

By Alan Madlane
Who doesn’t like magic?
Watching a magician ply their trade, one can find questions coming to the fore. Questions such as:
• “How did they just do that?”
• “Where did that thing just go?”
• “Why do I suddenly feel so inadequate as a human being?”
• “How quickly can I learn to do that, so that I might feel cool again, like I did before but now don’t anymore?”
Michigan is such a hotbed of magicians that the small Michigan city of Colon (pronounced koh-LOAN, pop. 1,173 as of the 2010 Census) has its website header proclaiming “Colon Michigan Magic Capital of the World.”
Hamtramck has its magic, as well – and not just in the pierogies and the Zywiec porter beer.
No, it’s got real live magic persons. And perhaps it’s most accomplished is Al The Only.
Al The Only is the stage name of Al Ulman, professional magician. And Al has a new edition of his book out: an impressive, 549-page tome entitled “The Magic Graveyard: The stories and secrets of the magicians resting in a small-town cemetery… and why they’re buried there!” (2021 edition).
That cemetery he references is Lakeside Cemetery in Colon, and this book details – with loving care – the numerous magicians, from Harry Blackstone Jr. on down, who now populate its grounds.
We caught up with frequent flyer (and part-time Hawaii resident) Al by email (and then he graced us with a follow-up visit to our office, and gave us a copy of the book!).
Presto! This interview is the result.

The Review: First off, Al The Only, for the uninitiated, can you provide just a couple of quick sentences about your upbringing here in Hamtramck?

Ulman: I was born and raised in Hamtramck, and attended Our Lady Queen of Apostles school (K-8), and still own the family homestead in town.
My first “real” job was a paper route, delivering the Polish newspaper, the Dziennik Polski. During summers of my high school years, I worked at the McDonald’s on 6 Mile.
Kosinski Hardware was my local magic shop. The guys there, Mr. Chet Kosinski, Joe, Mike and Nick were my go-to guys to repair props and build new ones. They knew what spring, wire or screw size to use to make my magic happen.
Lunch at Genie’s Wienies or Al’s Corral was always a treat. I feel blessed that I was raised in this wonderful community.
By the way, thank you for capitalizing the “T” in “The” (in Al The Only). The word “The” is part of my professional name; it isn’t a title.

The Review: Sure! Any special memories from here that you’d like to relive in print for a moment?

Ulman: My first paid magic show was presented in our garage for kids from around the neighborhood. I remember I made a whopping 85 cents!
I would visit the Hamtramck Library during their summer reading programs, and take out their books on magic. My brother, Fr. Stan, was my biggest promoter. My sister, Carol, was my biggest fan, and my brother, Joe, was my assistant in my early years.
My mom and dad were supportive of my career decision but early on, I’m sure they would have preferred I got a real job.

The Review: How did you first get interested in magic?

Ulman: Magic was my childhood hobby. I was glued to the TV set whenever there was a magic show.
I saw magicians at the Wayne County Employees Christmas party and at a Detroit Edison Christmas party. I was always fascinated by magic.
In 1969, in Mrs. Rose Galvin’s 5th grade class at Q of A, a classmate, Kinga Koscielski, did a small magic show for us from a magic set she received at Christmas. I was blown away.
I also remember my neighbors, Mark and Alan Glazewski, put on a small magic show in their basement. I didn’t see that show, but the idea really impressed me.
In the 7th grade, my teacher, Mr. James DiGuiseppe, had me do a couple tricks during a party for our pastor, Fr. Ted Blaszczyk’s name’s day.

The Review: How long have you been a professional magician? What have been some of your more memorable gigs? And have you ever uttered the words “Presto” or “Abracadabra” in one of your acts?

Ulman: I’ve been a full-time professional magician for more than 40 years.
All of the gigs are memorable, some of them for better reasons than others, but here’s a short list of some of the usual banquets, tradeshows, association conventions and private parties I’ve done.
Immediately after graduation from St. Mary’s Preparatory in Orchard Lake in 1976, I went to work for the Ken & Roberta Griffin Show, a traveling magic show from Hollywood.
For one year I was a roadie, stage hand and assistant in their two-hour illusion show. Toward the end of my stint, I also did a quick three-and-a-half-minute spot on their show. We covered an area from California to Florida, and all the way to upstate New York. I learned a lot about show business that year.
I went into my field as a full-time professional in 1980.
In 1982, my newlywed wife, Lori, and I did a school assembly tour. We did 340 magic shows in nine months, in seven states, at grade schools and high schools. I was on the “BOZO” TV show four times, and on “Kelly & Co.” 13 times.
I’ve been called the Godfather of Restaurant Magic in Detroit, having been the house magician at Carlos Murphy’s in Southfield for 14 years and the house magician at Kiernan’s Steakhouse in Dearborn for 16 years.
The most recent gig, that at this point is my career-topper, is that I had a four-month (Jan.-May 2020) contract in Sanya, China. Sadly, it came to a close at the end on January 30, 2020, due to the COVID virus.

The Review: Your book is very intriguing. You kind of went all-out, producing a 500-plus-page new edition of your book – and with so many photos in it! What first gave you the idea?

Ulman: Thank you. The 2021 edition of “The Magic Graveyard” is 549 pages, with more than 350 photos.
In 2010, I was asked to usher a tour of the magicians’ gravesites at Lakeside Cemetery — just on the outskirts of Colon, Michigan, “The Magic Capitol of the World” — during the Abbott’s Magic Co. “Magic Get Together.” I’ve attended every year for 48 years.
Even though I had heard stories of the magicians buried there, I started to write down notes as a reminder to myself. This resulted in the first printing in 2014. A more detailed account is in the book.

The Review: Did you have to get any special permissions for anything in the book?

Ulman: Yes, I have purchased licenses to reprint a cartoon, and for the use of copywritten photos.
Also, when I complete my first draft of each story, I send it to a surviving family member or estate executor for confirmation of names, dates and details. I give the family a chance to make suggestions for corrections or additions.
Even though I have more dirt on some of these folks than they are buried under, it’s not my place or desire to expose skeletons. Each story is written like an obituary on steroids.

The Review: Forgive the dark question, but hey, it is October: Do you plan to be buried in Lakeside Cemetery yourself, when the day comes? If not there, where? Or is that a magician’s secret?

Ulman: My wife Lori and I have our reservations in at Lakeside. We have our plots waiting for us after our final curtain call.

The Review: I love the idea that you’ll have a trick or two planned for anyone who visits your grave. … Thoughts?

Ulman: That’s still in the works. We have discussed ideas for our gravestone, but nothing definite as this time.

The Review: Do you think you’ll do another book in the future, and if so, what might that one be about?

Ulman: Sadly, this book is not finished. As more magicians are buried at Lakeside Cemetery, I will write a chapter about them, their careers and their lives.
The book, in its current evolution, is rather large. We are considering the next step for future editions, with the probability of offering addendums instead of rewrites.
I have two other book projects. The first would be to rewrite my 1984 book, “The Business of Restaurant Magic.”
The second book may be about the process of writing a history book. It would be about discovering inconsistent reports of a person’s life, contradictory data from different sources, and the detective-like work it takes to print conclusive information.
One of the individuals in “The Magic Graveyard” had three legal names on three government-issued documents, and was called by two more names. There wasn’t anything shady or illegal about the man. My researched showed the progression of his name.

The Review: Taking a quite different tack — have you ever seen a copy of the Necronomicon? Please lie about this in the affirmative.

Ulman: Absolutely, but I am bound to secrecy.

The Review: Feel free to add something here if we missed a question you hoped we’d ask!

Ulman: I can only guess that, because of my longevity in the business, I’m sought after for advice and guidance. Basically, I’ve graduated to being one of the old-timers.
I am humbled to be the mentor of three magicians. I’ve been invited to speak at conferences and be interviewed on podcasts, TV shows and Zoom meetings. I’m a performer, entertainer, showman, public speaker, product demonstrator, producer, lecturer, historian, collector, author, magician and a kid-at-heart.
Not just a kid, but a kid from Hamtramck!
I have been honored by being inducted into the Michigan Magicians’ Hall of Fame; being made a Life Member of the exclusive and prestigious Magic Castle in Hollywood; and I hold the title of the Order of Merlin — Excalibur in The International Brotherhood of Magicians.
My career has taken me around the world; a total of 2.2 million flight miles. Currently, I speak at elementary schools across the country with The R.O.A.R. Show – Respect Others Act Responsibly: a motivational, enrichment presentation about positive behavior, bullying prevention, inclusion, positive self-esteem and the use of good manners.
For the last 21 years, I have made a second home in Maui. They say that “You can take the kid out of Hamtramck, but you can’t take the Hamtramck out of the kid.”

The Review: Thanks for your time, and all the best!

(Al The Only very kindly said to us that he was just hoping for a small mention of his book and perhaps a photo, saying that he wasn’t so much of a talker, but he was being self-effacing: he clearly is a man with a multitude of stories to tell about a fascinating life lived in a fascinating industry. We’re pleased to have been able to pry a few of those nuggets out for this interview.)
Posted Oct. 29, 2021