Hamtramck’s emerging industry: Industrial recycling. Is that a good thing? 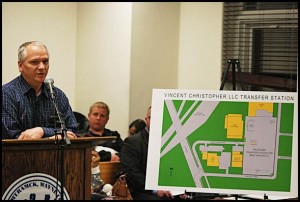 Robert Heide, the president of Vincent Christopher LCC is proposing to build a recycling facility that will handle demolition debris, at a site on Vincent St. If plans go accordingly, there will be a total of four recycling plants operating in Hamtramck.

“Are we going to be the recycling center of the state?”

That’s a question City Councilmember Robert Zwolak recently posed about the sudden rush of industrial recycling facilities either about to start up or planning to here in Hamtramck. By the way things are going, you could say “yes” to his question.

And we’re not talking about getting households to drop off recyclable items.     These businesses deal with business and industrial waste and haul their waste materials in by the truckloads.

The first to come into town is Hamtramck Recycling & Transfer, which has just built a new 32,000 square-foot facility on Denton St. and will be handling paper, cardboard and plastic.

Also new to town but already operating is a company called Styrecycle, which will recycle industrial Styrofoam, also known as polystyrene foam. The facility is located at 3901 Christopher, off of Conant.

It’s in this area that may become a hub for two other recycling centers.

One has been in the works for a few years, and if all goes accordingly it will locate in the former Missant site. This facility will likely be the most controversial since it will be recycling municipal waste, which in the trade is known as Dirty MRF (pronounced “murf”). It will handle mixed solid waste, as opposed to Clean MRF which is co-mingled items, such as what is picked up in curbside recycling.

The company, Green Power Technologies, has the backing of state officials. It promises that all of the waste will be dumped inside a facility, separated and the organic matter, such as food scraps, will be steam cleaned and turned into bio-fuel logs.

There has already been concern over odors, noise and increased traffic expressed from residents living across from Missant. Green Power Technologies says it would bring in over $1 million in property taxes for the city.

The plant will recycle some of the waste from construction demolition. Robert Heide, president of the company, said concrete and brick would be separated and “repurposed.”

The remaining waste would be shipped off to landfills.

Heide said the waste would be dropped off inside the facility, which would reduce noise. That will likely be an issue with the bordering neighborhood that’s just a stone’s throw away.

“We don’t expect it to be a noisy operation,” Heide said.

Heide added that the plan also calls for building a 12-foot wall along Vincent to further cut down on noise.

The council signed off on a host agreement with the company, but hiked up the tipping fee the city would receive from 15 cents per ton to 25 cents. Heide said he is still reviewing the agreement and couldn’t say immediately if he would accept the deal.

All of this had Councilmember Zwolak urging caution before proceeding further in order to check out what the ramifications are.

“We need a clear understanding of what’s going here,” he said at last week’s council meeting. He also cited past development failures that came back to haunt the city and taxpayers.

Two of the most notable had to do with the building of the Freezer Services warehouse on St. Aubin St., which was partly built on top of a former paint company. It took millions of taxpayers’ dollars to clean up that project.

The other controversial development was a medical waste incinerator, which the owners sold the project as being completely environmentally safe.

One of the owners at the time promised emissions from the plant would be nearly 100 percent clean.

It was anything but that, and it took local activists years to get the attention of county and state environmental officials to take action and shut it down.