Hamtramck’s end-of-summer party will have to wait 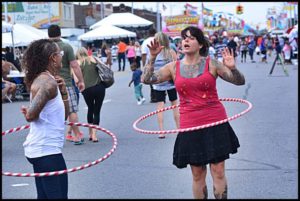 Summer won’t the same this year in Hamtramck now that the annual Labor Day Festival has been canceled. Hamtramck is not alone. Many other cities have been forced to cancel events because of the coronavirus pandemic.

By Alan Madlane
COVID-19, you are a harsh mistress.
The nefarious disease has claimed another in its long list of victims, this one a 40-plus-year tradition.
That is to say, the Hamtramck Labor Day Festival shall not be. Not this year.
No wacky dry-land boat race. No midway teeming with happy humanity.
No cotton candy, no elephant ears, no Polish Muslims (the long-standing parody band) performing on Sunday evening, no fun of any kind.
And while it hasn’t formally been announced, you can probably go ahead and bet a dollar that the Labor Day Parade will follow suit and cancel. No good way to ensure appropriate social distancing for that, so out it will surely go.
Oh 2021, you can’t come fast enough. This 2020 is an evil beast.
This is only the second time the festival has been canceled since it started in 1980. The only other time was in 2001, when a state-appointed emergency manager thought it would be prudent (considering the city’s then-serious financial crisis.)
Many other cities have already canceled their main summer attractions as well, including Detroit’s Electronic Music Festival that was to have happened this past weekend at Hart Plaza and other locales.
Gone are the Ann Arbor Art Fair, the Traverse City Cherry Festival, the Electric Forest Festival in Rothbury, the Holland Tulip Festival, and many, many others. Fourth of July fireworks will pop in front of empty lots and fields, if they pop at all.
Like your summer filled with quiet reflection? You’re in for a treat, ma’am or sir.
Like one with a lot of excitement? Then not so much.
Festival co-founder Konrad Maziarz lamented the decision he couldn’t not-make.
“It pains me to write these next few lines,” he said, in announcing the festival’s temporary demise.
“At this time, it doesn’t seem feasible to ensure the safety of the attendees or the community,” he went on, before joking about keeping up the tradition of doing himself accidental injury.
Mickey Lyons, a festival committee member, chimed in.
“We’ll be dreaming and scheming and planning an even better festival for the future,” she avowed.
We certainly hope his words bear a prophecy.
In the meantime, you’ll just have to fire off those water balloons someplace else.
Posted May 29, 2020

Editor’s note: The Review incorrectly identified the gender of a festival volunteer Mickey Lyons.
Lyons was referred to by the pronoun “he.” Lyons is female.
A correction has been made in the online version of the story.
The Review apologizes for the error, and for any inconvenience it may have caused.
Posted June 5, 2020