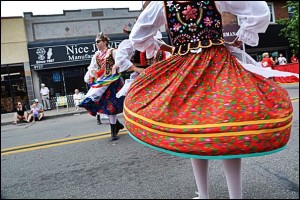 It was a whirlwind weekend for the Hamtramck Labor Day Festival.

By Charles Sercombe
Hamtramck’s annual Labor Day Festival had all the ingredients of enjoying another successful year.
A great band line-up.
Plenty of good food and cold beer.
An eclectic and funky selection of vendors.
Carnival rides for the kids.
And the Polish Day Parade.
What the festival didn’t have going for it was absolutely perfect weather and the usual huge number of people coming together for one more summer hurrah.
What happened, people?
Yes, attendance was down this year, but by how much is anyone’s guess. And yes, it did rain here and there but not that bad, and it mostly went away real quick.
Well, OK, there was a really, really bad storm on Monday – the last day of the festival – at around 6 p.m. We’re talking a very hard downpour and one that effectively ended the festival four hours earlier than the scheduled closing.
Still, there have been other years with spotty weekends that still had decent turnouts.
The downside of all this is that the low attendance put a dent on sales and earnings for the festival.
“We might get by, by the skin of our teeth,” said Co-organizer Shannon Lowell.
Lowell and fellow organizer Konrad Maziarz are already trying to figure out what to do to make sure people come to the festival next year and ways to shore up finances for unexpected drops in revenue.
Lowell admitted the festival isn’t mainstream enough and has a bit of an underground-street festival vibe about it – something maybe like the Dally in the Alley held around Wayne State University.
And the two organizers know they need to hold fundraisers and seek some heavy-hitters for sponsorship (hello Kowalski Sausage? American Axle? GM Poletown Plant?).
It’s no secret that Hamtramck is an inner-city, and crime perception might be a problem with some suburbanites. But judging from years past, that hasn’t been much of an issue.
And looking at the crime reports for this past weekend, there were only a handful of arrests, and those involved people being disorderly.
Security fences were erected along side streets and PNC Bank to keep tighter control of the flow of the crowd and that seemed to be effective in keeping the riffraff from running in and out of the festival grounds.
But there were two exceptions, sort of. On Saturday night, long after the festival closed, Club Aces proved once again what a lousy business neighbor it is for the city.
At around 1 a.m. the Jos. Campau club, located in the heart of the festival, expelled two waves of patrons, nearly a 100 or more each time. Those patrons tore across festival grounds, causing damage to some vendor tents and smashed down two security fences.
On Sunday at about 9:30 p.m., a person connected with Carbon Lounge squealed his car’s wheels on one of the side streets and raced down the west alley of Jos. Campau to Carpenter where he crashed into three parked cars.
The driver’s Corvette was totaled and the passenger in the car was thrown out and almost died. The driver tried to run away but was captured by police officers and is awaiting charges.
But still, as dramatic as those events were, the festival was essentially crime-free during festival hours.
On Wednesday, Lowell seemed to be carrying a heavy load and lamented: “I think we dealt with every problem you can deal with.”