Hamtramck’s Memorial Day celebration had a special meaning this year 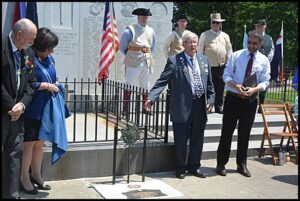 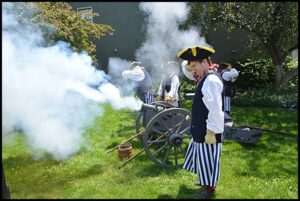 The hour-long event drew about 100 people to the park on a sunny and blazing hot afternoon.
Adding color to the backdrop of the event were men dressed in Revolutionary War-era military clothing.
A brass marker has been installed in front of the grave, which is a replica of the original one that disappeared a number of years ago.
Hamtramck was a French-Canadian, who fought with valor during the war.
While the name Hamtramck may not sound French, the city adopted that namesake over 100 years ago when it was still a village.
Mayor Ameer Ghalib noted that Francis Hamtramck started a tradition of immigrants making a difference in this city and the country.
“Hamtramck has a tradition of being a welcoming community that focuses on our strengths, not our differences,” Ghalib said. 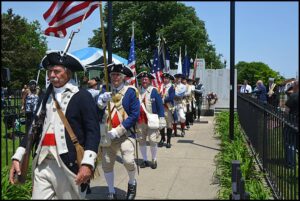 This year marks Hamtramck’s 100th anniversary of becoming incorporated as a city.
As a village and township, Hamtramck extended all the way to the Detroit River and all the way east to Lake St. Clair. Over the years, that territory got divided up into several other communities.
The Memorial Day dedication is just one of several centennial celebrations planned for this year.
Posted June 3, 2022