Hamtramck’s most notable get their due in new book 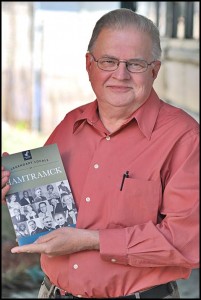 Greg Kowalski loves Hamtramck. And it’s paying off in making him a repeat published author.

You see, Kowalski, editor for the Birmingham Eccentric by day, is a prolific author as well. This is his sixth book, all of them related to some aspect of Hamtramck history.

He’ll be signing them all, including his newest, “Legendary Locals of Hamtramck,” this Saturday (June 30) from noon to 3 p.m. at the Polish Art Center.

Asked how many months had passed since his previous book, the irresistibly titled “Wicked Hamtramck: Tales of Liquor, Lust and Lead,” Kowalski was right on the question.

“I’ve been averaging over one a year, but it’s actually been more than a year since the last one,” Kowalski said. “I had two books come out in 2010, but none last year.”

And this new one — how did it come together?

“Arcadia Publishing does a number of book series,” Kowalski explained. “I did one for their ‘Then and Now’ set before. When I saw that they had a ‘Legendary Locals’ series, I contacted them right away. They gave me quick approval for the book. Hamtramck has so many people who fit the description of ‘Legendary Locals.’”

So, Greg – who, among the approximately 170 people and organizations profiled in this book, really stands out even above the others, in your mind?

“Well, there are two really – no, three. Emil Konopinski, who helped develop the atom bomb in the 1940s. Maurice Keyworth, who was just a phenomenal educator whose innovations in the field actually got used, in some form, all over the country. And Fred Kovaleski, who used his tennis playing career to cover for the fact that he worked for the CIA.”
It turns out that Kovaleski is still living, in a Park Avenue apartment in Manhattan, Kowalski discovered. He has since opened up a line of communication with him.

And what about the notorious or ignoble among us? Kowalski is diplomatic.

“I wouldn’t want to impugn anyone,” Kowalski said. “But there have been more than a few, let’s say, people with ‘colorful’ pasts. Paddy McGraw once ran the biggest whorehouse in the Midwest here. Mayor Tenerowicz. Private Eddie Slovik.

“And then, there was the sad story of Bernice Osinko,” Kowalski continued, referring the 17-year-old churchgoer who was horribly raped and murdered in an alley, while returning from church, some 75 years ago, her killer never found.

“Her case is still awful to think about. It was Hamtramck’s murder of the century, though. My own mother still remembers that day.”

And what about recent, or even current, favorites?

“Well, Mayor Majewski is in there – she’s Hamtramck’s first woman mayor. Both Tamara Sochacka and Greg Kirchner from the library are in there. Yvonne Myrick, who’s currently on the school board, among her other past achievements.”
Asked about the undeniable fact that many of the names from the past are Polish, while Hamtramck’s demographic keeps moving farther toward the Asian end, Kowalski acknowledged the shift.

“Shahab Ahmed is in the book; he really was the first to make his mark from the Bangladeshi community. I was talking with a student the other day, who’s doing a paper on the changes the city is seeing. I told him ‘If this were 100 years ago, we’d be having this conversation in German and talking about all the Poles moving into town.’
“But the future is theirs, too. It will just take a bit of time for them to make their mark.”

Many of the pictures in the book — and there are a lot of them — are property of the Hamtramck Historical Commission now, with a number of them coming from the city’s previous newspaper, The Citizen, or in some instances from private sources.

Kowalski even admits to the occasional “dumpster diving” when he has a hunch that there may be some worthwhile historical artifacts that have been chucked out by someone.

For Kowalski, a veteran of numerous book signings already, he’ll find Saturday enjoyable, he says, just as he always has before.

He might even be working on an idea for the next book.

Stop by The Polish Art Center, at 9539 Jos. Campau (between Norwalk and Poland), Saturday afternoon from noon to 3 p.m. Call them at (313) 874-2242 for more information. And enjoy meeting Greg Kowalski, truly one of Hamtramck’s biggest boosters.