Hamtramck’s muralist has this advice for youngsters: Start now 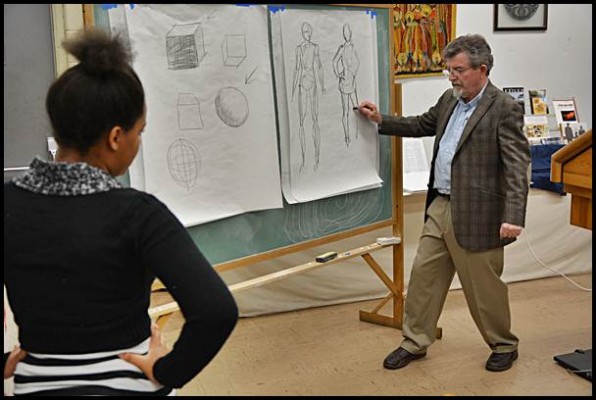 Hamtramck muralist Dennis Orlowski explains how he goes about creating his paintings. His most well known mural is in Pope Park.

Local muralist extraordinaire, Dennis Orlowski works fast and furious, sketching his large-scale public works of art from memory and real life, but never from photographs, which “just slows me down”, says Orlowski.

This insight and many others were given by Orlowski at a lecture held at the Hamtramck Library this past Tuesday.

“My practical father recognized that I had a smidgeon of talent, and so arranged for me to take twice weekly lessons from Cleta Popovich, a Serbian master oil painter who had painted opera backdrops in the World War I era.  He was 72 years old, and was as agile as I was.  His art literally held him up.”

After interning for three years under Popovich, Orlowski was painting portraits of local luminaries, and went on to paint murals in Europe while serving in the Army.

Orlowski further studied painting in NYC, and learned fresco painting under the tutelage of a former Diego Rivera protege at the University of Mexico. Finally settling back into teaching in the Detroit Public Schools, Orlowski spent many years encouraging children by sharing his love and knowledge of oil painting.

All the while, Orlowski was true to his goal of creating large pieces of painting in public places that people could enjoy.  Over his career, Orlowski, who lives in Hamtramck, has been commissioned to paint over 100 murals all over Southeast Michigan.

Several children were in the audience, and Orlowski beseeched them to “Start now! Start drawing and painting while you are young. If you wait until you are 18, you are finished!”

To demonstrate his drawing from real life technique, Orlowski pulled a young volunteer from the audience and did a rough sketch of her.

“I can only draw that fast because I learned at a young age, and never stopped,” he explained while quickly sketching his subject. “The more you do something, the better you get.”

To view Orlowski’s work, you don’t have to walk far.  The colorful courtyard scene of a polish village in Pope Park, and the comprehensive and highly detailed History of Hamtramck at People’s Community Center are two of his most recognizable works in town.  In both of these murals, everyday people are featured.

“My stuff lasts because it is good,” Orlowski said. “Not like this generation of graffiti artists who are just using spray paint to shout.”