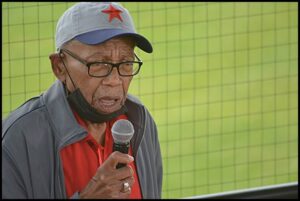 Former Negro League baseball player Ron Teasley was the guest of honor at Monday’s rededication of Hamtramck’s historic baseball stadium. The stadium was once home to the Detroit Stars, which was part of the Negro League.

By Charles Sercombe
Leave it to Hamtramck Historical Commission Chairman Greg Kowalski to put Monday’s rededication ceremony for the historic Hamtramck Stadium in perspective.
“We are making history today,” he said. “We are finally seeing this stadium restored.”
On Monday, about 200 people, many who appeared to be from outside of Hamtramck, came to celebrate the rebirth of the stadium, and also to pay tribute to Negro League player Ron Teasley Sr., now 95 years old and still as sharp as they come.
Teasley was there with his family, and sat front-row center by the lectern that faced the newly-installed bleachers.
He spoke briefly.
Teasley said that, in the stadium’s heyday, it was “jammed” with people, especially after church services on Sundays.
Organizers hope that the stadium’s new life will also attract thousands of visitors.
The stadium’s history was not fully realized until several years ago, when it was discovered that it was built in 1930 for the Negro baseball league – which was back in a time when African-Americans were barred from playing in the then-all-white Major Leagues.
The stadium is one of only five such stadiums still standing.
Greg Kowalski said that this part of history was not known when he was growing up and playing in the stadium himself in the 1950s.
“It was buried in Hamtramck’s history,” he said. “Hamtramck Black history is simply amazing.”
Once the stadium’s historical significance was discovered, the city was able to attract various government and private grants. Over $2 million has been spend on rebuilding the stadium and grandstands, as well as on replacing the field.
It is hoped more grants will be awarded to turn the area into a full-blown entertainment site – one where various sports can be played, as well as concerts and other activities.
A former student of Teasley said that while there were two separate baseball leagues at one time – one for whites and the other for blacks – the Negro League was superior.
“The Negro League was the Major League,” the student said.
Baseball historians back that statement up, saying the Negro League had far better talent.
State Rep. Abraham Aiyash, a Hamtramck resident, perhaps summed up the rebirth of the stadium best.
“We are the crown jewel of the Midwest,” he said.
After the rededication ceremony, two all-black baseball teams, one from Chicago and one from Detroit, squared off and played a game.
Both teams were wearing uniforms from the era of the Negro League.
Baseball is back in Hamtramck.
Posted June 24, 2022