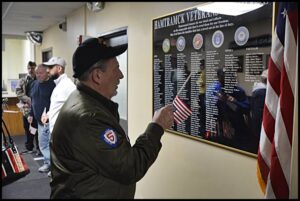 The city unveiled a new memorial to residents who died in service to the country.

By Charles Sercombe
Hamtramck veterans unveiled a new memorial for those who died in service.
Veterans, city employees and others gathered in city hall Wednesday afternoon for a dedication ceremony for a new plaque. The plaque bears the names – all 208 of them – of the Hamtramck residents who died in World War II, Korea and Vietnam.
(No Hamtramck residents have died fighting in Afghanistan or Iraq.)
Mark Widsinski, a member of VFW 4162, said the memorial is “not about war, but to freedom.”
Another speaker, Mark Kabanowski, noted that his uncle’s name is included in the memorial. That uncle, Stanley Kabanowski, was killed in World War II, on Nov. 10, 1944, while in France after coming upon a German line.
He was 27 years old. Germany surrendered six months later, on May 7, 1945.
Mark Kabanowski said his uncle’s body was eventually returned from France and reinterred in Mt. Olivet Cemetery.
City Manager Kathy Angerer also reminded those gathered that Raymond Zussman’s name is included among the names.
Zussman is the only Hamtramckan to receive the Congressional Medal of Honor for his heroic actions in WWII. The park across from city hall is named in his honor.
The new memorial was donated by PLAV 6 and VFW 4162. The new memorial also coincides with the 80th anniversary of the attack on Pearl Harbor, which abruptly ushered the United States into WWII.
Posted Dec. 17, 2021