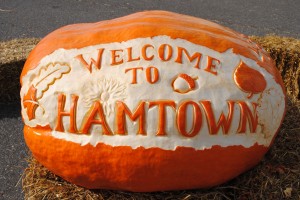 Last weekend was a Ham-good time. It marked the celebration of the first-ever Hamtown Harvest Festival.

Held in the grounds of the city parking lot between the Polish Village Café and Polonia Restaurant, the two-day event was fun for all in attendance. The entire lot was converted into festival grounds, complete with two large tents that housed a stage and beer tables. Bales of hay lined the area while husks of corn covered the parking meter posts to create a farm-like feel.

In addition to the perfect execution of the festival itself, the weather couldn’t have been better, either. Both days were clear and sunny with moderate temperatures – unseasonably warm to be more exact – and there was hardly a cloud in the sky. It was an excellent weekend for a hayride through Hamtramck or to just sit and drink from a hearty selection of Oktoberfest beers.

For entertainment, there was pumpkin painting and a donut-eating contest for the kids, performances by dance troupes and live music by the Polish Muslims, the Howling Diablos, Eddie Blazonczyk and Danny D. And as promised, during Danny D’s set there was a “hot legs” competition, although instead of being with men in lederhosen it was with women in the traditional German dirndl.

Overall, the weekend had everything that could be wanted for a festival except one thing: a large turnout. While the crowd size was decent, it was a little lower than expected. However, though the Harvest Fest may not have been a complete financial success, between the revenue from it and the Labor Day Festival there is still about a $2,000 profit.

Festival organizer Kathleen Bittner said that it takes a few years to build an event and she is hopeful that it will grow each year. At the same time, she also said that in the future she’d like to shift the efforts of the group that organized the past two events away from festivals – which only bring people to the city for a short time – to promoting Hamtramck as a place to live, work and have a family.

“Hamtramck is here and full of endless possibilities,” she says. “We want to show people how.”