HCAT will honor beating victim known for his care of strays 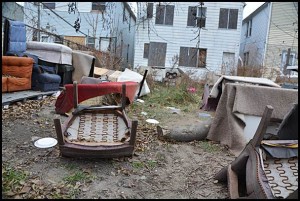 This backyard on Danforth St. is a refuge for stray cats that assault victim Nick Veselenak had created. Hamtramck’s cat rescue organization, HCAT, has taken over the care of the cats now that Veselenak is unable to continue.

Hamtramck’s cat lovers have a new cause this year.

HCAT, the Hamtramck Cat Assistance Team, is dedicating its yearly fundraiser in honor of Nick Veselenak, 60, of Danforth St. who was viciously beaten recently by two teens.

Veselenak, who went by the nickname of “Casper,” was known for taking care of dozens of feral cats in his neighborhood.

It appears Veselenak will not be returning to Hamtramck anytime soon. He is recovering from his injuries in a nursing home, and it’s likely he has suffered permanent brain damage.

How Veselenak survived before the beating is a mystery. He was considered semi-homeless and often walked the city streets wearing headphones no matter how hot or cold it was.

Despite having limited financial means, he was faithful to his collection of stray cats, said Chris Wilinski, of HCAT. Wilinski said Veselenak would spend his day collecting food for his strays and material to build them shelters in the backyard of what is apparently an abandoned house on Danforth St.

Wilinski said HCAT volunteers set up additional cat shelters in the yard and will continue to feed them.

But it’s not cheap.

The hope is to raise enough money to continue caring for the strays and when spring comes, to neuter and spay them so they will stop reproducing.

Admission is $10 for adults, $8 for seniors and $5 for kids. It includes a spaghetti dinner and a cash bar.

Wilinski said he seeking to contact Veselenak’s family in order to invite him to the dinner. If any family member is reading this, Wilinski asks that you call him at (313) 407-3662.