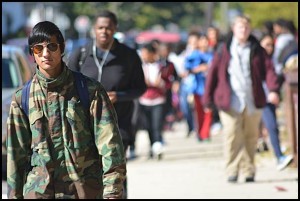 Next Wednesday, Oct. 1, is the official head count of students.

By Charles Sercombe
Hamtramck Public Schools were bracing for a loss of 80-some students this year.
The good news is that projected loss was off by almost half.
“We are down 47 students from last year’s head count with six school days to go,” said Superintendent Tom Niczay on Monday.
Next Wednesday, Oct. 1, is the official head count for all school districts. Niczay said there is a good chance another 20 or so students will trickle in by then. He said a number of students go away, overseas, during the summer and return after the new school year starts.
At this point the loss of 47 students equals $329,000 in state financial aid. However, since the district anticipated a larger loss, there is now a cushion to absorb it.
Eventually, though, the trend of losing students each year to nearby charter schools and other districts will eventually impact the district’s ability to function.
“We can’t have a school district with this trend,” Niczay said.
Before the advent of charter schools, the district hosted around 5,000 students. There are now several charter schools and academies in — and nearby — Hamtramck, each catering to the different ethnic communities living here.
Each student represents about $7,000 in state aid. Wherever that student goes, the money follows.
To combat the loss of students, the district has waged an enrollment campaign. It has a slogan, too: “Start Here, Stay Here, Succeed Here!”
The district also boasts far more resources and federal programs than competing charter schools can.
Despite the loss of students, the district has weathered the resulting financial storm. A few years ago the district was facing an $8 million budget deficit. Through cutting and outsourcing jobs, such as custodians and bus drivers, Niczay said the deficit is largely gone.
By next year, he said, the district should have a modest surplus of $130,000. The district had been on a five-year deficit recovery plan, which was supposed to end next June. Niczay said the state gave the district a one-year extension.
The schools’ budget runs almost $30 million, with a good chunk of that dedicated to special state and federally-funded programs.