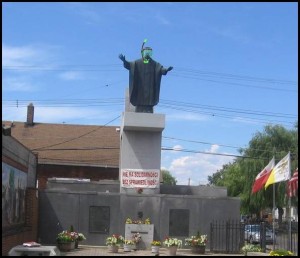 Although Thursday’s heavy rains caused a massive flooding of streets and basements, there were some who took it in stride and had a little fun. Above is a photo illustration by Konrad Maziarz on how the Pope statue dealt with the deluge.

By Charles Sercombe
Hamtramck’s Achilles’ heel once again acted up on Thursday.
Heavy rains in the metro region caused massive flooding throughout the area – including Hamtramck.
The rains caused many streets to flood and worse, once again basement backups.
By 11 a.m. a number of residents reported about one foot of flood water in their basement.
At the time The Review went to press, the situation wasn’t going to get better. Rains were predicted to continue in waves through the rest of the day and Friday as well.
The city has taken a first step in fixing the problem of basement flooding by installing a new sewer system in the southend on Jos. Campau and Goodson. But that repair is still ongoing and did not provide relief.
The city was forced to update its entire sewer system because of ongoing basement flooding. A group of residents filed a lawsuit against the city a few years ago which resulted in a payout to them and a court order for the city to begin repairs to the sewer system.
The entire project will take years to complete and cost upwards of $40 million. City officials say they don’t know where that funding will come from.
The initial repairs were funded by an $11.5 million grant from the state’s Department of Environmental Quality.
So, while it appears there will soon be some relief, the threat of basement flooding will continue for a number of years.
But this being Hamtramck, residents have developed a sense of humor about the issue. Konrad Maziarz, an IT specialist at the Hamtramck Public Library, used his Photoshop skills to add a funny touch to the Pope statue that summarized the city’s deluge.
Enjoy.

Update: Although it’s unlikely you would get anywhere suing the city for basement flooding since that’s already been done and the city has agreed to take steps to correct the problem, there is another form of relief.
According to a notice put out by the city of Hamtramck, you can make a claim to recover costs of damaged or lost items caused by flooding.
You can find the claim form – “Sewer Overflow/Back-Up Claim” — online at: http://hamtramck.us/services_department/index.php

Update2: What is the chance of receiving compensation by filling out that claim form? Nada, or in other words, no chance at all. That’s because this week’s flooding did not rise to the level of an emergency, at least what the Federal Emergency Management Agency (FEMA) considers an emergency.

But, and this is a big but, by filing a claim that will help the city track where flooding is happening. With this information, the city can make a good case for receiving government funding to tackle this problem. Plus, if the rains continue and it does get to the level of an emergency, your claim will already be on file.

So what’s an emergency? That’s when flooding comes up to your living area. In other words, the back water rises up through the basement and into the first level of your dwelling.