HHS Cosmos reach for the stars this season 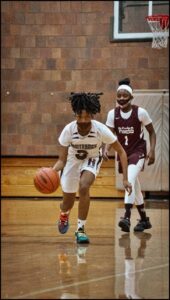 The Cosmos boys basketball team had a nine-game winning streak this year, but fell short of winning a district championship on Saturday.

By The Hamtramck Public School District
As March Madness grips the nation, the Hamtramck Public Schools community has had its own taste of hoops mania with the success of the Hamtramck High School boys and girls’ basketball teams.
Both squads had extremely successful seasons, despite facing restrictions and ever-changing circumstances due to the pandemic.
The boys’ team finished the regular season with a nine-game winning streak and locked up the Michigan Metro Athletic Conference (MMAC) title – its first title in 15 years.
The team, which was ranked tenth in the state by Mick McCabe of the Detroit Free Press, got off to a quick start before falling just short in the Division 1 district championship game this past Saturday.
“We’re extremely proud of the way these young men played during one of the most challenging seasons in recent memory,” said Brian Anderson, HPS Athletic Director.
“Coach (Dennis) Foster did a tremendous job preparing and leading them throughout the season. We expect to build on the momentum the team developed this year and hope to be back in the championship game once again next school year.”
The HPS girls’ team also had an impressive season, finishing the year 9-5 with major wins against River Rouge, Ecorse, and Harper Woods.
“Those teams are typically at the top of the conference, so it meant a lot to be able to prove that we were a team that belonged in the league championship conversation,” Anderson said.
“Coach (DeMeisha) Fambro had the team ready to play from day one and the results were there throughout the season. This team captured a lot of attention and is going to make even more noise next season with the return of solid players like Aniysia Lewis and Kyndal Farver.”
Both Junior-year students, Lewis and Farver had particularly impressive seasons – not only by demonstrating a fierce ability to score, but by making their teammates better with their all-around playmaking skills. Lewis joined the team when she was just a freshman and has shown continuous improvement throughout her years on the squad.
“For many children, athletics is a critical part of the education experience – reinforcing the importance of teamwork and how to react to and overcome adversity,” said Jaleelah Ahmed, HPS Superintendent.
“Participating in sports helps develop well-rounded individuals who are ready to work with others for a common cause and to strive for success as they prepare for life in college and their career. I am proud of our basketball teams’ achievements, but I’m even more proud of the character they demonstrated throughout the season.”
After finishing the regular season strong, the HPS boys’ team headed into the playoffs with a lot of momentum – and it showed during the championship game.
One of their most impressive highlights this season was defeating River Rouge twice, resulting in their winning the MMAC title – something they will build on next season.
“To be able to take down a champion like River Rouge – who had won the MMAC title five years in a row – was a true testament to the character of our team and the excellence of our coaching staff,” said Anderson.
The Cosmos received standout play during the season from Javier Whitaker, Hershel Marion, Amari Allen, Aaron Allen and James Clay, among others. What made the team so successful this season was how well they worked together, building off the different set of skills they brought to the court.
“All of the players on the team have been with Coach Foster for a long time and have grown up together both on and off the court,” he said. “Their chemistry was obvious from the moment they stepped on the court this season and is why the team was so successful.”
Both the boys and girls’ teams had historic seasons, all while navigating an entirely new learning environment brought on by the pandemic. The start of the basketball season was continually postponed, as COVID-19 cases rose, and school remained fully virtual.
When the teams were allowed back to practice, they were required to wear masks during all activities — a transition that took some getting used to for many athletes.
“The kids and coaches handled it with a lot maturity and poise. I think that helped us when it came time to finally play games,” said Anderson. “Everyone was so happy to finally be able to play that they were able to deal with things well whenever adversity crept in.”
Congratulations to the Hamtramck High School Cosmos on a great year of basketball.
Posted April 2, 2021