HHS seniors cruise to a successful end of school year 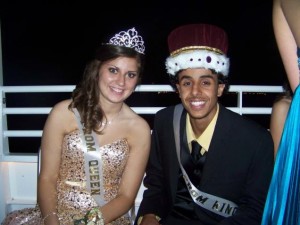 By Ian Perrotta
The four years of hard work put in by Hamtramck High’s senior class clearly paid off.
Last Thursday (May 20), after years of fundraisers that included bake sales, car washes, and an improv comedy show, the class of 2010 celebrated prom in style aboard the 138-foot yacht Ovation.
After the ship set sail around 7 p.m., it cruised along the coast of Lake St. Claire for three hours before returning to dock for an hour-long after party. As the boat sailed, the 150-or-so students on board were able to enjoy a tasty buffet spread and an ice-cream bar in the lower levels of the ship. On the open-air top deck, a DJ played everyone’s favorite hits as groups of teens lit up the dance floor.
Without a cloud in the sky it was a perfect night for prom, and one that only got better for two students in particular. Omar Thabet, quarterback for the football team and star pitcher for the baseball team, was elected Prom King, while Emina Alic, class president and captain of the soccer team, was named Prom Queen.
While the prom was a great way to celebrate the end of high school, the reason for attending classes was on full display Tuesday (May 25) afternoon during the senior honors program, which recognized Hamtramck’s students for their outstanding academic achievements.
“Senior award recipients: You represent your family, your school, your community, and of course Hamtramck. Always be proud that you are from Hamtramck,” said school superintendent Tom Niczay. “I personally, and the teachers and administration, will use you as examples to motivate others to show what can be accomplished when you apply yourself.”
Because so many students received awards and scholarships, it’s hard to say who received top honors. One thing is certain, however – these kids are incredibly smart and talented. Jihan Aiyash and Tamal Sikder were co-valedictorians for the class of 2010, and Zolak Datta took home salutatorian honors. Additionally, Sikder received over $140,000 in scholarships while Aiyash earned $42,000 worth of tuition.
It wasn’t all about grades at the ceremony, but it’s probably safe to say that these next few students surely did well. Naznin Aktar, Rabina Ali, Rubina Ali, Anjuman Ara Asha, and Almedina Osmanovic all had perfect attendance over the past school year.