HHS soccer team on the road to regaining its title 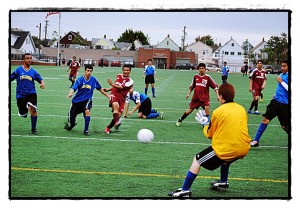 The Hamtramck High Boys Soccer Team is back, and they’re looking to score.

After a heartbreaking defeat last year in the District Finals, the team has come out strong in the first half of the season. The Cosmos are already off to an impressive 4-0 record and have yet to be seriously contested. Of the games they have played so far, they have outscored their opponents by a wide margin in each.

On Monday (Sept. 27) the team played a home game against Star International Academy, winning it by a score of 8-0. Amazingly, all eight of the team’s points came in the first half, during which the Hamtramck offense overwhelmed the Star’s defense and scored at ease. Even after rotating out his starting line, Head Coach Dennis Celic was forced to graciously hold back his team from continuing to dominate the game.

But the damage had already been done. Demoralized by the skillful, fluid play of the Cosmos, the Star team forfeited the rest of the game. Unfortunately, this denied Celic the opportunity to give his younger players more game-time experience, but it did serve as a lesson on how a lack of fundamentals can quickly lead to chaos on the field. Most importantly, it moved the team one step closer in giving them another shot at the District Finals.