HHS students learn about the power of the spoken word 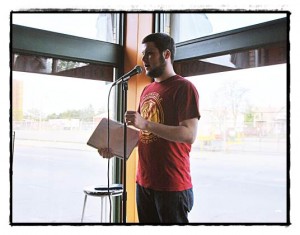 Café 1923 was lit up this past Friday. Lit up with the incendiary words of youthful poetry performance, that is.

Hamtramck High students, under the tutelage of Isaac Miller (a northern California transplant with some impressive credentials himself), waged verbal warfare for a shifting audience estimated at about 30 to 40.

Miller was the 2007 Bay Area Teen Poetry Slam Champion, and is also the 2010 recipient of the Judith Lee Stronach Baccalaureate Prize for his Project for Youth Poetry and City Creation in Detroit.

Some of his spoken word performances are currently featured in Youtube videos (although he shares time there with a like-named skater kid). In one rant entitled “Wiretap,” he describes American post-9/11 military action in a harsh light. In another, called “Saturday Mornings,” he relates the tale of a refugee friend and his family, and touches on their struggles in Laos, post-Vietnam War. Clearly, American military conflicts are a touch point for some of his own work. 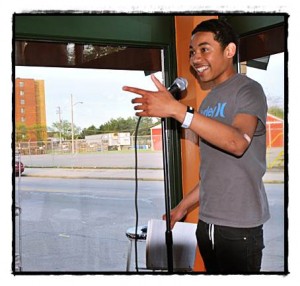 Miller reports that the kids spoke on a wide cross-section of topics. Many did pieces relating to their lives at home, experiences they’ve gone through already, or hopes, visions or fears for their futures. Some spoke as other characters. A few produced more song-lyric styled material. Nervous of voice or not, all seemed to gain from, and appreciate, being part of the event.

Miller works with these kids at the high school, through an arrangement as a “workshop facilitator.” He first met librarian Nancy Erickson through an Allied Media conference they both attended. This led to his meeting with the English department staff, and from there the alliance was forged.

This collaboration will bear fruit when Miller oversees the group of kids selected to represent Detroit this July in the International Youth Poetry Slam being held in San Francisco. He will accompany the group there, and as a prior winner, should have excellent advice to impart to the young wordsmiths.

Miller also works with a couple of local non-profits: the Inside Out Literary Arts Project and the already-mentioned Allied Media Projects. But, he clearly has an affection for the spoken word thing.

“It lets these kids explore their voices,” he said. “And then, (the initial exposure) helps motivate them to further work on their craft.”

The kids are judged by a five-person panel. It’s not a complex formula, but they’re mostly chosen based on the quality of the work, as well as the performing of it. “Works that move the audience,” Miller notes. “That’s what they look for.”

Under his guiding hand, can another award be too far behind? 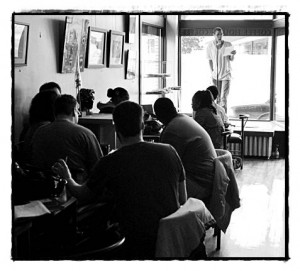