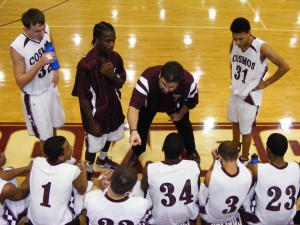 By Ian Perrotta
Review Staffwriter
The first game back from the winter break did not end well for the Cosmos’ (1-4, 0-0) Varsity Basketball Team. Despite a good second half effort that gave them the lead going into the fourth quarter, the Highland Park Polar Bears roared back to win the game 68-58.
The Cosmos started the game a little slow, but hit their stride in the third quarter when they outscored Highland Park by 12 points and took the lead. However, Head Coach Mark Nezich says in the fourth quarter the team lost focus and the game as a result.
“Overall, it was a very competitive game,” he said. “We have to find a way to be more consistent – we play well in spurts and we need to translate that in four full quarters.”
The Highland Park team was a little stronger physically, and they were able to make most of their free throws down the stretch, two factors that Nezich believes ultimately made the difference.
However, the Cosmos still managed to play some good ball. Junior point guard Jonathan Mckenzie scored a team-high 18 points. Senior Javontae Hines nearly had a double-double with 10 points and eight rebounds, and senior Tarik Cehajic came off the bench to add eight points and seven rebounds.
The Cosmos next game is tonight (Jan 15.) at the Hamtramck Community Center on Charest. The Junior Varsity team plays at 5:30 p.m., and the Varsity team tipoff is at 7 p.m. It’s the start of league play, so be sure to come and cheer on the team.