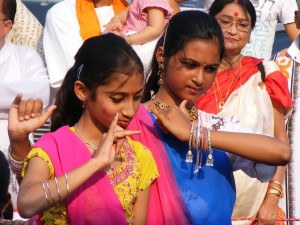 Last Saturday the Durga Temple of Detroit began the two-day celebration of Suvo Janmashtani (a birthday ceremony for Hare Krishna) with a parade through the streets of Hamtramck.

The event began at the parking lot at Caniff and McDougall and was attended by about 200 people from the Hamtramck/Detroit Hindu community.

Before the parade, a special performance of the Bharatnatyam (an enactment of the Hindu epics through dance) was put on by the younger females of the temple.

Instructor Sunonda (Tina) Samaddav described the dance as “cultural pizza” for both the girls and the audience in attendance, explaining that “teaching them to dance will give them a venue to go beyond their community and to integrate.”

Samaddav’s sentiment was reflected by Hamtramck Mayor Karen Majewski, who inaugurated the event with a brief speech before marshalling the parade from the back of a motorcycle driven by Councilman Shahab Ahmed.

“There is a motto in the United States: E. Pluribus Unum,” she said, “out of many, one. That is what we have here today: people from many places making one community.”

The sense of community certainly was an emphasis of the parade. The route was planned around streets that had large numbers of the temple’s devotees living on them, allowing the devotees to bring out fruit and other confectionaries from their houses to be first offered to Hare Krishna and then eaten by the crowd. With the addition of Kanti Bandhu Brahmachari, a swami from Bangladesh, the event had a true level of authenticity that could only be achieved in Hamtramck.

After the parade, the devotees crossed the Detroit border and returned to their temple, located just off of Ryan and McNichols. They then enjoyed the rest of the night and the next day celebrating the birth of Hare Krishna through song, dance and a whole lot of incredibly fantastic food.

The Durga Temple of Detroit is located at 4215 E. McNichols and encourages anyone who is interested in learning more to stop by during their woship ceremony on Sundays at 6:00 p.m.