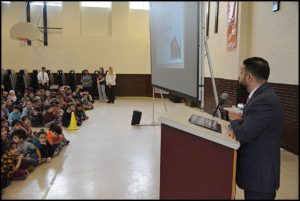 Tau Beta Elementary School Principal Nabil Nagi welcomes students, teachers and guests to the unveiling of a Michigan historical plaque that is installed outside the school’s front doors. The state has now officially registered the school building as being historical.

By Charles Sercombe
Back in 1927, the Tau Beta building on Hanley St. was a bustling community center for newly arrived immigrants.
There, they were schooled on how to transition to their new life in America.
The building is now part of the Hamtramck Public School District, which recently purchased it from a former charter school organization.
Tau Beta’s important role in shaping the life of a generation of Hamtramckans is now officially recognized by the state.
It is also now on the state’s Register of Historic Buildings.
A green plaque stands outside the school’s entrance that tells the story of the building and what happened there.
Tau Beta was a society created by four teenage girls from Grosse Pointe.
The girls initially started their outreach to Hamtramck in a building across the street, just as Hamtramck began to expand in population by leaps and bounds. The newly-opened Dodge factory was employing thousands of immigrants, many of them newly arrived from Poland.
The building later hosted a number of civic events, but then was abandoned and left to rot. 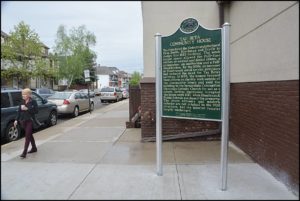 Fortunately, a charter school organization saved the building, but the school couldn’t compete in the tight education market here, and closed.
Last Wednesday, school officials hosted an unveiling of the historical marker. Rain prevented holding the event outside, so students, teachers and guests met in the school’s cafeteria.
Hamtramck Schools Superintendent Tom Niczay credited his staff for being able to swing a deal to purchase the building.
It is now an elementary school.
“It belongs to the people who live in the city, who live in the neighborhood,” Niczay said.
The school is indeed a very part of the neighborhood, sitting side-by-side with residences along the block. Most of the students who attend there also live in the neighborhood.
School Board President Magdalena Srodek said the students are “lucky” to attend a school with such rich historical importance.
“This is an amazing event,” she said.
May 31, 2019