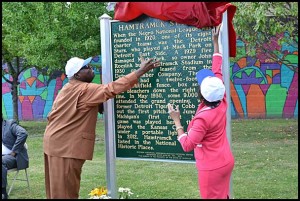 Hamtramck School Board President Titus Walters and Linda Forte of Comerica Bank unveil a historical marker for Hamtramck Stadium, home to the famed Detroit Stars of the Negro League, during a ceremony Thursday afternoon. Comerica Bank donated $5,000 for the marker.

By Charles Sercombe
Hamtramck Stadium is one step closer to hitting a home run.
On Thursday afternoon, city and state officials gathered near the stadium with a host of other dignitaries to celebrate the installation of a historical marker.
The ballpark was once home to the Detroit Stars, one of a dozen teams in the famed Negro Baseball League.
Among those attending was Rosilyn Stearnes-Brown, daughter of Norman “Turkey” Stearnes – one of the most famous players in the league.
The event was hosted by the Friends of Historic Hamtramck Stadium, who were also responsible for getting state-recognition of the park. This is the first step in seeking grant monies to renovate the stadium into a functioning ballpark and tourist destination.
The stadium is also one of a few structures remaining from the Negro League era, which started out in the 1920s and ended when Major League Baseball finally became integrated in the 1950s and 1960s.
Hamtramck Stadium was built in 1930 and was home to the Detroit Stars. Not only did Stearnes play here, but also the legendary Satchel Page, perhaps the greatest pitcher ever.
Funding for the stadium has already begun, thanks to a $5,000 donation from Comerica Bank used to purchase the marker.
The stadium was acquired by the City of Hamtramck in 1940 and renovated in 1941 by the Wayne County Road Commission using Work Projects Administration or WPA funds.
The stadium was placed on the National Register of Historic Places in 2012.
We’ll have more about the stadium and the installation of the marker in next week’s issue of The Review.