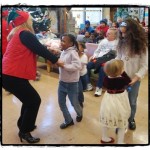 By Charles Sercombe
If there was snow on the ground here in Hamtramck and you threw a snowball, chances are no matter where it lands something Christmassy happened there or was about to.
Maybe it’s a reaction to the harsh economic times we are all suffering through because it seems the holiday spirit has been a lot more ho-ho-ho than in previous years. Let’s see, where to begin with this round-up?
Let’s start with last Friday when Hamtramck Public Schools bus driver John “Hippo” Hypnarowicz held his annual Christmas party at the PNA hall for Special Ed students. The hall was filled with love and affection as each child climbed up on Santa’s lap and received a present.
That Santa guy was busy over the weekend. On Saturday he flew into the Hamtramck Public Library where Library Director Tamara Sochacka was leading a group of kids in dance.
Also on Saturday, employees at the Henry Ford Medical Center in Hamtramck visited at St. Joseph’s Health Center on Conant where a dozen or so tenants received presents.
The city even got into the spirit by placing white bags over parking meters in the downtown area so shoppers could shop without worry about getting a parking ticket.
The toys kept piling up over P.L.A.V. Post 10 where a Toys for Tots collection was underway.
The good folks at Holy Cross Parish were busy selling homemade chocolate treats and Christmas items after Mass during the past few Sundays. The money raised went to purchase new winter coats for needy kids at Dickinson West Elementary School.
Parish members didn’t stop there. They also collected hats and mittens and scarves for the kids as well. There was enough clothing collected to go out to over 500 students. The restaurant Maria’s Comida also has a coat drive going on. The restaurant has a collection box near the front door if you want to pitch in.
Over at Acts 29, enough money was raised to purchase 62 beds for needy families and Recycled Treasures kicked in bed sheets and pillows to go with them.
A year ago, Hamtramck 31st District Court Judge Paul Paruk was invited to a speech by Oakland County Executive L. Brooks Patterson who mentioned he set up a donation drive in which county employees pay $1 to dress causal on casual Fridays.
Paruk took that idea and set up a similar fund for the court employees who donated $1 to dress casually each Friday. The court took that money and gave a donation to two mothers who each have five kids and are struggling financially.
The mothers, Deanna Parks and Jaclyne Fetko, were contacted through the assistance of the Hamtramck Public School District. Both had huge smiles as they accepted the donation. You can bet their kids are going to have a merry Christmas.
Whew.
At this rate it looks like every Hamtramckan will be touched by the holiday bug.