Holiday season may come with a legal fight for city 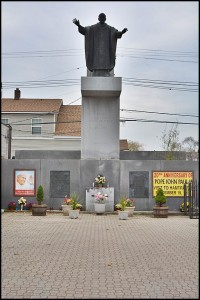 The city council cleared the way for someone to set up a nativity scene in Pope Park. But one resident has warned of legal repercussions.

If it’s the Christmas season, you can expect a legal battle somewhere in the country over whether a nativity scene can be placed on public property.

It’s a debate that’s been going on for years.

At last week’s city council meeting, the council agreed to allow a nativity scene to be installed in Pope Park, which is city-owned, at Jos. Campau and Belmont.

The idea came from City Councilmember Robert Zwolak, who said he was approached by St. Florian parishioners about the matter.

He was accused by local Internet blogger Hillary Cherry of creating a “wedge issue” meant to divide the community.

“I fail to see what merit it has,” Cherry said.

She later warned there will likely be a legal challenge by the ACLU, and that the city could risk having the monument of Pope John Paul II, which is the centerpiece of the park, hauled away.

In an interview with The Review, Zwolak disagreed with that assessment.

“I don’t see where this is a wedge issue considering (Councilmember) Mohammed Hassan made the motion,” to approve the resolution he said.

Hassan, who is of the Muslim faith, was later asked to explain his reason for supporting the motion, and he said: “Honestly, I don’t have a clue.”

Councilmember Cathie Gordon defended the motion, saying that the park is Christian in nature and built to “revere” Pope John Paul II – the first and only Polish pope.

The pope is not only a religious figure, but is also considered a head of state, and thus when visiting the US is afforded secret service protection.

Gordon also pointed out that the Muslim community was, allowed to hold an Eid event in Veterans Memorial Park, another city-owned park.

Councilmember Tom Jankowski noted that the city of Warren went through a legal fight to allow a nativity scene on public property and prevailed.

As for the ACLU, no one could be reached for comment in the Detroit branch. But in its website regarding religious displays in the “public square,” the ACLU had this to say:

“The issue is not ‘religion in the public square’ — as the rhetoric misleadingly suggests — but whether the government should be making decisions about whose sacred texts and symbols should be placed on government property and whose should be rejected.”