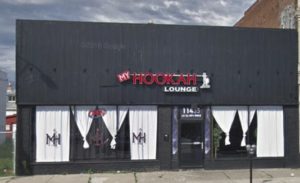 By Charles Sercombe
The city’s second homicide within the last nine months has once again happened outside of the MyHookah Lounge on Jos. Campau.
Police are not releasing many details, but Police Chief Anne Moise said that a shooting that happened on Aug. 11 at 12:40 a.m. resulted in two people being hit, a 26-year-old male in the head, and a 25-year-old male in the leg.
The 26-year-old eventually died of his wounds. The names of the victims were not released.
There is no description of the suspect or suspects, nor a motive for the shooting.
A shooting death also occurred at the lounge last December at about 2 a.m. when three people were shot.
One of the injured also died in that incident. Police released a photo of a black male that they described as a person of interest.
No arrests were made in that December shooting, and it is still being investigated.
Sources told The Review that investigators have been frustrated by the lack of cooperation among those at the lounge.
Apparently, the same obstacle is handicapping investigators in this latest shooting, which is the city’s first homicide of the year.
In the meantime, city officials have closed down the club, and will decide soon whether to permanently yank the business license.
The Review called the business several times, but no one ever picked up the phone. The lounge is located at 11435 Jos. Campau.
Anyone with information is asked to call the Hamtramck Police Department at (313) 800-5280.
Aug. 23, 2019

One Response to Hookah lounge closed in shooting