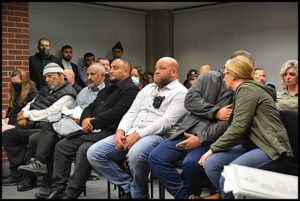 The issue of what students should be allowed to read in the public school district is still ongoing, although there is little evidence that there are more than a couple of books that were deemed sexually inappropriate.

By Charles Sercombe
Following a recent raucous school board meeting regarding student reading material, Board President Salah Hadwan says he is conducting his own investigation.
The Hamtramck Public School Board is the latest board of education to come under scrutiny over what some say are inappropriate books on sexual and gender issues.
In total, there appear to be just two books in question in the HPS District, and it was pointed out that they were never required reading and, in fact, no student had even cracked them open.
Hadwan announced on Facebook that he is investigating what books are available in the district’s schools.
“Some of you asked me to verify these concerns by going to the libraries to check for any other sexually explicit books that might be inappropriate for minors in our schools,” Hadwan said.
“I was able to make some time to do what was asked of me by community members. I can tell you that this will take a lot of effort to check every book, but I will do my best. I have started this process of verifying what we are told by the superintendent and teachers.”
Hadwan went on to say he found one book that he objected to, but he did not identify it.
The reaction to Hadwan’s investigation on various Hamtramck-based Facebook pages was mixed, with some praising him and others questioning this approach.
Veronica Lewis was critical:
“So basically, he (Hadwan) is saying on Facebook that he will be a one-person censorship committee reading every single book in Hamtramck Public Schools looking for what he considers explicit or derogatory?
“Please, bring on the lawsuits.”
Hadwan is not alone in reacting to the public concern. Mayor Amer Ghalib also reached out to the community on his Facebook page.
“We heard you. As a parent, I personally share the same concerns with you about the kind, quality and future of education for our kids.
“We trust that you and the board of education will solve the pressing books issue in the best interest of our kids and our community as a whole.”
The mayor has no authority or control over the public school district.
In the meantime, the Michigan Chapter of the American Civil Liberties Union is cautioning school districts away from censorship. In a letter sent to districts statewide, the ACLU said:
“In debating whether to allow students to check out a controversial book from the school library, it is easy to lose sight of the overarching function of our schools: to train young people to think for themselves.
“Many years ago, the Supreme Court explained the essential role our schools play in helping young people to develop into the reflective and critical citizens that a democracy needs to survive and flourish: ‘The Nation’s future depends upon leaders trained through wide exposure to (a) robust exchange of ideas which discovers truth out of a multitude
of tongues, rather than through any kind of authoritative selection.’”
The ACLU warned that banning books could result in legal consequences, saying it “will take action if necessary to stop censorship and protect the rights of all children to safe and inclusive learning environments. In addition to threatening the First Amendment rights of all students, this wave of book-banning is an attack on LGTBQ+ children and their families, and it must be stopped.”
Posted Nov. 18, 2022