HPS graduate spreads the word about reaching out to help others 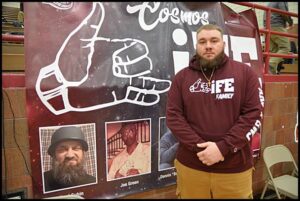 Daniel Gubin is spreading positive messages about life and appreciating those who made an impact on our lives through a special promotion.

By Alan Madlane
Paul Gubin was frequently spotted out on the streets of his hometown of Hamtramck. A larger-than-life presence, he unfortunately passed away this past December.
His son Daniel coaches boys basketball at Hamtramck High. As a tribute to a friend who, himself, had died back a couple years ago, he and a few others had used that friend’s life-appreciating idea: to put the word LIFE on a t-shirt.
Simple enough. But that lone word, not used as an acronym for anything else, but simply there in big, bold letters, took on a, well, LIFE of its own.
But why not let Daniel Gubin tell the story?

The Review: So, let’s start at the beginning. What was the genesis of LIFE?

Daniel Gubin: We were in high school, me and a couple of friends. One friend, Anthony Akra – he died in December of 2017 – came up with the idea when we were all hanging out: to spread positivity through life, by, for example, putting that message on a shirt.

The Review: So how did it grow from that beginning?

Gubin: After Anthony passed, it was mainly to support his family. Then his parents gave us their blessing to use the idea, to go farther with it. It grew by word of mouth, mainly.

The Review: What types of items do you have for sale?

Gubin: T-Shirts, short- and long-sleeved jerseys, hoodies, and hats. The beanie hats. We may eventually try shorts or pants.

The Review: Where did it go from there, then?

Gubin: I started putting together some community events. I put together a three-on-three basketball tournament at Keyworth. We got 12 teams – even one from as far away as Ohio. We bought new nets, balls and put up for prizes.
We did this because we were able to get sponsorships from local businesses: Dunwell Dry Goods, Maine Street Restaurant, Mostek Paint, Judge Krot. GOD Knows Products also. Coach Foster helped with it.

The Review: Why basketball?

Gubin: I had coached boys basketball for five years, since 2017. Varsity coach DJ Foster had a saying: “Change the mentality.” I asked him to partner with me on putting this together, since it was basically the same concept.
I started by giving little speeches. We had a number of kids who had passed, and I wanted to get more active with the community. So, we started honoring the surviving families once a year, families who had lost someone.
We did T-shirt giveaways, where the shirt would have the person’s name on the sleeves who was being honored. The idea was to support the families. It grew from there.

The Review: In fact, you recently lost your own father.

Gubin: He passed away on December 1 of last year. I was so appreciative of the support that I got. I printed up one batch of shirts with his initials on the front, underneath the logo that says “LIFE.”
My main source of motivation is from my parents and my family, absolutely, so that small gesture was the least I could do.

The Review: What sorts of things do you have in the works to keep the momentum going?

Gubin: Besides more basketball tournaments, I thought about doing some flag football. Some other fundraisers and giveaways. We thought to give some shirts to some in the homeless community.

The Review: Who actually prints up the shirts?

Gubin: Dunwell Dry Goods – you can get different colors, patterns, pretty much what you want on the shirts.

The Review: Well, it’s a terrific thing you’re doing, and we wish you all the best to keep it going.