Huntington Bank is relocating to a new location 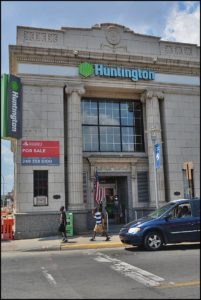 Huntington Bank will soon have a new office in the Hamtramck Town Center.

By Charles Sercombe
A Hamtramck landmark building is about to go through a major change.
Recently, Huntington Bank announced that it was moving out of its location at Jos. Campau and Holbrook, and relocating to the Hamtramck Town Center – in the former Payless shoe store.
The Review reached out to a corporate representative for comment but never heard back.
But sources in the bank told The Review that the building is too big, and the energy costs are too costly.
“We don’t use the upstairs, and we can’t afford the maintenance,” said a source, who did not have the authority to speak to the media.
Another issue was that parking is in the rear of the building, and patrons were complaining about having to walk from the lot to the front door, which faces Jos. Campau Ave.
The new location will have an ATM inside and outside the bank. It will open on Aug. 14. There will no longer be a drive-up window, but there will be a drive-up ATM in the parking lot.
The real estate company, Cushman & Wakefield, out of Southfield, is handling the sale. The property has not been listed yet, and there was no information about the building available.
The local agent handling the sale of the building, Jarrod Champin, said there is a pending sale, but he couldn’t disclose details, other than to note that the building is about 16,000 square feet.
The owner of the building, which Champin could not identify, lives in California.
The building has been a bank, in one name or another, virtually since it was built in 1918, and was originally home to Merchants National Bank.
The bank was long-known as Liberty State Bank.
All three of Hamtramck’s longtime bank branches have undergone numerous ownership and name changes since the 1990s.
We asked Hamtramck’s historian, and director of the Hamtramck Museum, Greg Kowalski to elaborate on the history of the building.
“The bank did not survive the Great Depression, and in the early 1930s the building, which had been converted to the North End General Market grocery store, was completely remodeled when Liberty State bank opened there in 1936,” Kowalski said in an email to The Review.
“Liberty State Bank was founded in 1918 by Joseph Chronowski in a building at the corner of Jos. Campau and Norwalk. This site and the adjoining building were owned by the Chronowski family.
“The ‘JC’ initials can still be seen in the ornate carving above the main door of what is now the Polish Art Center. Liberty State Bank thrived and needed more space.
“Joseph Chronowski died in 1958 at age 78.”
Posted July 17, 2020