If immigration is key to success, Hamtramck wins the prize 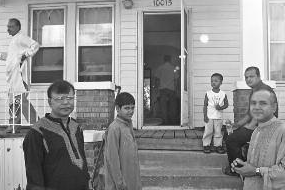 Detroit is buzzing with ideas, brimming with activity. When I say Detroit, I include Hamtramck in the developing big picture.

When I say ideas and activities I mean research, panel discussions, art and design projects; alternative energy initiatives, transportation and information upgrades; greater emphasis on education and medical infrastructure as engines for growth and innovation.

If you pay attention to Model D and metromode — two web-based publications that have been following and participating in these trends as a unique ongoing media project for the past five years — you probably already get the drift.

A region built on a foundation of industry and manufacturing is in transition. Out of necessity, the pace of change is accelerating. It has to. In a recent issue of Model D, former State Rep. Steve Tobocman made a strong case for another even more organic, human factor that can help move the region forward: immigrants.

Tobocman writes: “A full 37 percent of Michigan’s foreign born possess a four-year college degree as compared to 23.7 percent of U.S.-born Michigan residents. American and Michigan immigrants have the educations and skills in the science, technology, engineering, and mathematics (also known as STEM fields), critical to our region’s success in the new economy.”

Tobocman represented Southwest Detroit in Lansing. It is one of the region’s most diverse and vibrant communities, largely Hispanic, but also home to Arab- and European-Americans, with a growing number of artists, musicians and hipsters. Much like Hamtramck, in fact.

Tobocman also points out that even if Michigan immigrants don’t start a high-tech firm or become venture capitalists (and that’s certainly not for everyone, immigrants or native born) they are more entrepreneurial and more likely to start businesses.

Michigan immigrants are productive, hard-working, and more likely to be employed, Tobocman says, and are unique catalysts for economic renewal and population growth in cities like Detroit and the region’s other core communities.

We already see the benefits in Hamtramck, with the emergence of Conant as a Banglasdeshi business enclave, the southend developed by Arab investors and entrepreneurs and other Albanian-, Macedonian-, Bosnian- and Polish-American business owners in other parts of the city.

Precisely what happened on Conant beginning in the late-1990s, in other words.

And a few final words from Tobocman: “There are tremendous assets (here) upon which to build a Global Detroit. Detroit has the second largest immigrant population of any Great Lake regional metropolitan area with 365,000 foreign born (8.4 percent of the regional population) with some of the world’s largest populations of Middle Eastern, Albanian and Macedonian outside of their home regions. We possess a significant number of global firms (more than the Celtic Tiger of Ireland), a bi-national business culture, and 23,600 international university and graduate students (the eighth largest population of any state) who inject nearly $600 million annually into the state’s economy and represent a strong foundation of talent upon which to build.”

That’s a pretty good start on re-shaping the region for the future. And Hamtramck, humming to its own global tune for decades, is one of the key pieces in this developing picture.

More thoughts on this in weeks to come.