If it’s a Hamtramck arts festival, don’t expect the ordinary 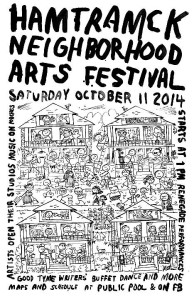 By Mike Murphy
Special to The Review
The Hamtramck Neighborhood Arts Festival may be becoming best known for what it’s not.
It is not held on a few streets where artists acting as vendors hawk their wares from makeshift wooden stalls. It is not solely designed to put money in the pockets of artists, although the practice isn’t frowned upon.
What it is, however, is an expansive and open display of the city’s arts community, its individual artists and how they work. It’s an invitation to anyone who wants more than a peek to have a long, lingering look instead.
“It’s not Metro Times. It’s not Budweiser,” said Public Pool gallery owner Steve Hughes. “It’s us, and it’s authentic. It will give you a flavor of the town that you’re not going to get another day. It’s totally unique to Hamtramck.”
The Hamtramck Arts Festival will be held Sat. Oct. 11 beginning at 1 p.m. About 35 venues, including galleries, studios, shops, clubs, and private homes will participate this year.
Maps locating the venues will be published on the Festival’s Facebook page and paper copies of the map will be available at all the venues on the day of the event. Festival goers are advised to turn the Festival into a nice long walk.
“The best way is by foot. So get some comfortable shoes, and a map, and explore Hamtramck and all the spaces that are out there,” Klinger Street Studios owner Jonathan Rajewski said.
Although the Festival has grown considerably in venues and participants since it was first held four years ago, organizers still describe it in ways that evoke a refreshing “let’s put on a show” spirit sometimes associated with neighborhood acting groups or basement musicians.
This year, people from all walks of Hamtramck life have been enlisted in the Festival through a poster project designed by Rajewski, who created a poster template full of information about the Festival but left a blank spot in the middle of the poster.
“I thought the best way to get the neighborhood featured, was to get the neighborhood involved,” Rajewski said. “So it’s an invitation to artists — and not just artists — to fill in the space. The mayor has done one. Some incarcerated men who I work with have done one.
“It’s an empty space, and people are encouraged to do whatever they want. So far we’ve got 40 or 50 and we’ve got some great results. We’re expecting more in the next couple weeks.”
According to Hughes, who initiated the festival four years ago with fellow gallery owner Steve Panton (9338 Campau), the two gallery owners brought in Kristen Rose to help with publicity for this year’s event.
“She’s been a huge asset,” Hughes said. “In years past, it’s just been me and Steve scrambling around.”
Scouring the remnants of last year’s Hamtramck Arts Festival on the Internet leaves an impression that the annual festival is living up to its own hype. It really is unique in that instead of lining the artists in a row, organizers make a map of participating venues and let visitors wander off on their own aesthetic scavenger hunts to observe artists creating art.
It started with questions Hughes — who found his own artistry in writing — had of artists. Maybe it’s part of the reason he opened an art gallery, and part of the reason he initially asked Hamtramck artists to open their homes, studios, and galleries to the public.
“As a writer, I got real interested in art.  What is it? What’s behind it, and why?” Hughes said. “The weird and special thing is that you’re going in this private place.”
What may make the festival genuinely unique is that it offers up a birds-eye view of many arts in the making. It will include music inside the galleries and studios and on porches sprinkled throughout the city blocks.
Hamtramck preschools will also be on hand to engage little ones, and Hughes said Mayor Karen Majewski may be giving Polish dance lesions. He said that some aspects of the Festival are still coming together.
“This is artist-activated,” Hughes said. “We just sort of provide the framework.”
One featured event later in the evening will be the Good Tyme Writer’s Buffet,” featuring six local writers and Hughes, who has a book of short stories slated to be published by Wayne State University Press.
“It’s probably the most non-boring literary series in America,” Hughes said. “If you can’t stand one writer, it will be over in ten minutes,” Hughes said. He said the readings will be followed by a potluck dinner.
Hughes also noted the recent death of Detroit’s beloved artist and College of Creative Studies’ educator Gilda Snowden. Snowden had been working on a painting for the Festival when she died of heart failure in September.
“It’s super sad, but it’s kind of an amazing thing, too,” Hughes said. “It’s artists like her who embody the spirit of the festival.”
For more details and to see some of the posters created to publicize the event, check  https://www.facebook.com/HamtramckArts.