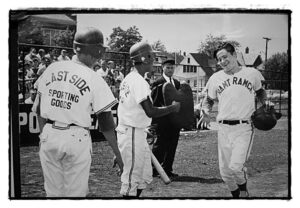 By Alan Madlane
One of Hamtramck’s favorite sons is finding himself back in the local spotlight.
Art “Pinky” Deras (his Polish grandmother gave him the nickname, never explaining why) is known to many as the greatest Little League baseball player to have played the game.
He was the unquestioned leader of the dozen-plus-player team that won it all in 1959. And it’s a team getting shone down upon once more, because a Michigan team just won it all again, 62 years to the day later.
That team came from nearby Taylor. But the effect is, that many around here are moved to recall the earlier team: their glorious run to the top of the heap, and the player who carried them there on his back.
Baseball is one of the team games, that’s true. But sometimes, a player is just that good, that he rises above.
Art Deras rose to heights that were dizzyingly amazing.
In that fabled 1959 season, Hamtramck got to the Little League World Series by winning nine of their first ten games by shutout.
In the finals, Deras one-hit Puerto Rico, hit a grand slam in a semi-final 7-1 win over Hawaii, and demolished West Auburn, California in a 12-0 championship game rout.
How about these 1959 season stats for Deras: As a pitcher, 18 starts: 18 complete game wins, 16 by shutout, 10 by no-hitter. He struck out 298 batters, only allowed 26 outs to be made in the field, and only walked 10.
Impressed yet?
Well consider that he also hit .641 as a batter, with 33 home runs and 112 runs batted in.
After leading Hamtramck to the Little League final, he led a team of 13- and 14-year-olds to the Pony League World Series Championship two years later.
Tom Paciorek, another local hero, and teammate from that latter squad, who played for 18 years in the Major Leagues, remembers Deras as a physical specimen who seemed to be more mature than the other kids.
“At 12 years old, he was bigger, taller and stronger than the rest of us, and the greatest player ever at that age,” Paciorek told the National Polish American Sports Hall of Fame.
“He was just so much better than the rest of us.”
So what became of Deras?
In the end, he never played higher than AA ball.
Let’s back up.
He won letters all four years in high school in baseball – and in football, as well. He had matured into a six-foot-two, 200-plus-pound quarterback. He had a full scholarship waiting for him at Michigan State University under then-coach Duffy Daugherty.
But he followed his first love. baseball – and the money, which his family needed – and signed with the St. Louis Cardinals for an $80,000 bonus.
Why not with the Tigers? They got outbid.
Unfortunately, in a five-year minor league career, he never pitched an inning; the Cardinals tried to convert him to a third baseman, and then to the outfield.
He played 518 games in the minors, and only totaled 32 home runs. His best year at the plate, he hit .269 – for the Arkansas Travelers of the Texas League, the same year the Tigers were winning the World Series as underdogs to those same St. Louis Cards: 1968.
While there’s no question that Deras was an incredible athlete for his age, he very likely also benefited from being big for his age as well. He dominated his peers in a way perhaps never seen. For that alone, he is rightfully a legend, both here in Hamtramck, and beyond.
Deras is now 75 years old and retired from the Warren Police Department, where he worked for 30 years.
For that one glorious season of 1959, he was on top of the world. And in so achieving that pinnacle, he will long remain one of Hamtramck’s favorites.
So as we celebrate Michigan being in the national spotlight for Taylor North’s magnificent run in the Little League World Series, let’s not forget to give a tip of the cap back to the original superstar: Art “Pinky” Deras.
Posted Sept. 3, 2021