In Hamtramck, a year of challenges and ongoing development 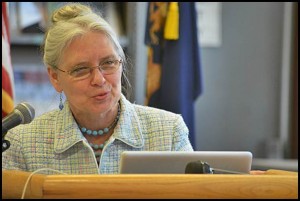 In her eighth State of the City Address, Mayor Karen Majewski once again had a little something of everything to report on.

Cathie Gordon was the only city councilmember to attend.

In Majewski’s almost hour-long speech, she acknowledged the city’s financial woes and the appointment of an emergency manager to take over the city.

Majewski, who is seeking her third term, blamed the city’s financial crisis on the loss of property taxes, and the state’s “systematic and purposeful erosion” of state funding.

That’s increasingly been a rally cry among Democratic elected officials who blame Gov. Rick Snyder’s government for causing many communities to crash financially.

This “perfect storm” of events, said Majewski, was anything but a “natural” occurrence, calling it “manmade, preventable and reversible by public policy.”

Without reform, she warned, “we’re likely to see more local governments sinking, clinging to the slippery lifeline of emergency management, which can choke as easily as it rescues.”

The mayor continued in her Address by going department by department, talking about what has happened in the last year or so. The Police Department, she said it has been “streamlined,” continues to partner with other investigative agencies and continued its community policing.

For the Fire Department, she credited it with getting a federal SAFER grant which reimburses the salaries for 12 firefighters through the year 2014.

City Hall also saw changes, she noted. The Clerk’s Office was moved into the Treasurer’s Office to begin cross-training among employees. A backlog of business licenses waiting to be processed has been tackled, and a new program to keep better track of city records, some of which have been scattered throughout the building, is beginning.

You may have noticed a citywide sidewalk repair program that’s been going on for the last year, thanks to infrastructure repair by DTE/MichCon, and the city’s own program through the Public Services Department, Majewski said.

Majewski said she hopes the emergency manager will restore funding to cut down weeds in city lots and at foreclosed properties.

The resurfacing of Conant had been a point of contention in city government, and Majewski said there are ongoing discussions with Wayne County officials to speed up that needed repair.

“It’s taken a lot of pressure,” she said.

Wayne County is responsible for the maintenance of Conant and Jos. Campau.

Basement flooding is a constant worry for many residents, and Majewski reminded the public that there is an engineering study underway to come up with a plan to make lasting repairs to avoid further backups.

Majewski pointed out that she herself has been a victim of basement flooding.

Development-wise, the city is going through the very last stage of building houses to comply with a housing discrimination lawsuit filed over 40 years ago.

With that lawsuit nearly settled, it has allowed the city to start selling 400 city-owned lots that it had been holding to satisfy the need for housing sites.

Majewski said city officials are drawing up a plan to dispose of the lots in a fair manner. Those lots, she added, represent $3,000 each in potential property taxes that can be collected once the lots are purchased.

On the horizon is a new recycling plant that will bring in 15 new jobs, and GM is expanding its production work at the Detroit-Hamtramck Poletown plant, which helps ensure future tax dollars coming to the city.

There is also a boon in the growth of small businesses, Majewski said.

“The atmosphere for small businesses in Hamtramck is strong and it’s growing stronger,” she said.

Although Majewski didn’t mention it, she has joined that growth by recently purchasing and renovating the former Cody Hats building on Jos. Campau.

(Want to find out more about development in the city? Go online at www.develophamtramck.com.)

However, she seemingly cautioned that like it or not, “nothing lives without change.”

Whatever changes come from the top, Majewski said it’s the people who live here who can make the biggest difference.

Despite only 20 or so in attendance, Majewski received a rousing applause, leaving her beaming as she mingled with the crowd.