In Hamtramck, police gear is not a subject of debate 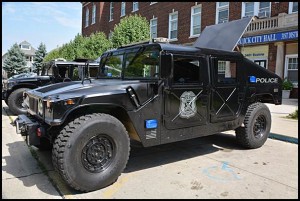 Many communities, including Hamtramck, received free used military vehicles during the past few years. Critics have said this has made police departments look like an occupational army force.

By Charles Sercombe
It’s a subject the media has been talking a lot about lately.
Police militarization.
Following the recent clash between the public and the Ferguson Police Department in Missouri, the subject has become hotly debated: Are police departments becoming more and more like an occupational army force?
Some of the images we have seen include officers dressed in what looks like combat gear, carrying military grade assault rifles and riding in Humvees and other Defense Department hand-me-downs.
In Hamtramck, our department received two Humvees leftover from the Iraq War, and prior to that the city partnered with other cities to share an assault vehicle.
Our department also has a SWAT team that dresses in full protective outfits.
But in general, our officers wear regular uniforms, and the Humvees are mostly for show.
Police Chief Max Garbarino is defensive about the subject, saying wearing protective gear, no matter what it makes the force look like, is needed to save officers’ lives.
“When you respond to a riot and you are getting rocks and bottles thrown at you, what are you supposed to do?” Garbarino said.
He also noted that wearing bullet-proof vests and helmets is nothing new.
“Police officers have been wearing helmets and riot gear for years,” he said. “People are overreacting to it.”
As for the appearance of Humvees and other military vehicles, you can thank the Defense Department for that. As the Iraq War wound down, the agency decided to hand them out to communities to help bolster public safety officers.
Garbarino said he displays the department’s Humvees during the Labor Day Festival, community events and whenever there is a crowd situation, such as at Club Aces recently when hundreds of patrons were kicked out for rowdy behavior.
At community events, Garbarino said, the vehicles are a hit.
“The kids love them,” he said.

One Response to In Hamtramck, police gear is not a subject of debate