In Hamtramck, taking a tour of the world comes easy 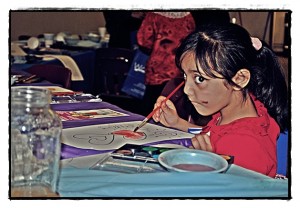 About 200 people showed up for the afternoon event, which featured an array of international performances and activities. Among the highlights were dances by Arabic, Polish, Bosnian, Hungarian and Bengali groups, teas from around the world, and plenty of opportunities to learn about the various cultures that can be found in Hamtramck.

A new feature this year was the introduction of the passport, which proved to be a hit with the kids. After learning about a country, the passports were then stamped, allowing the children a chance to experience an aspect of true international travel. As an added bonus, participation at a culture or craft table also earned a raffle ticket.

“The day turned out wonderfully” said Tom Cervanek, Executive Director of PCS. “I don’t think the building could have held any more people.”