In these needy times, soup kitchen’s return is a blessing 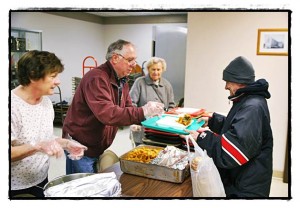 St. Lad’s soup kitchen has relocated to Our Lady Queen of Apostles Parish. It still operates every Thursday.

Well, it’s not all bad news for the poor and needy.

In spite of what may seem, here and around the country, something like a war on those below the poverty line, there are always a few folks with kindness in their hearts – and still enough money in their wallets, or food in their pantries – who try to help by making a real, grass-roots difference.

Such a group of folks are those who have just reopened the old St. Lad’s Soup Kitchen, after a three-month hiatus. Now located inside the Queen of Apostles’s Activity Center, and renamed the “Genesis Soup Kitchen,” it is open on Thursday afternoons from 4 to 5:30 p.m.

The church threw their doors open, with little fanfare, on March 8, to some 35 of the area’s less-fortunate on that first day. And while that’s less than the 80 to 100 or so that Program Coordinator George Vucinaj says were a typical day’s worth of patrons at St. Lad’s, the thought is that the program will almost certainly see an increase in those numbers, and quickly, once the word hits the streets.

Vucinaj, 34, also acts as one of the cooks for the enterprise. 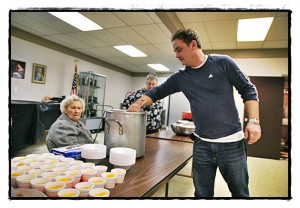 The soup kitchen is actually a combined effort of five separate parishes: St. Ladislaus, Queen of Apostles, Transfiguration Church, Our Lady Help of Christians, and St. Louis the King.

Some of these are located in Detroit, north of Hamtramck, but they are all close enough – both geographically and in purpose – to be able, in this instance, to meld into one for the common good.

“Generally, it’s a meat dish, salad, soup, pie, avegetable. We give them milk. Also, things to take home with them – bread, so on,” he elaborated.

They don’t get any government money for this, nor do they apply for it.

Instead, local parishioners donate much of the food, or else the money to buy it from such local stores as Sam’s Market (who gives a discount), Polish Market and Fresh Valley. After that, Vucinaj and others will cook it up and dole it out.

Those who show up for the meals run the gamut, from mothers with kids in tow to single men, and including some people who may have mental issues or substance abuse problems.
As we all know, there’s no shortage of people going without out there to help.

Our Lady Queen of Apostles Catholic Church is located at 3851 Prescott at Conant. The Genesis Soup Kitchen is open to all who need it, while the food lasts, on Thursday afternoons from 4 to 5:30 p.m. You should enter from the north side, off of Harold St. Call (313) 891-1520 for more information. 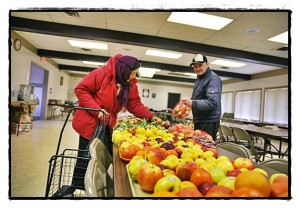