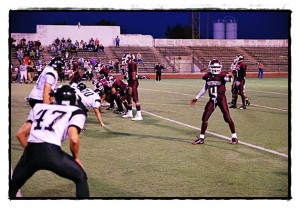 To say the least, this season’s Homecoming game didn’t go as expected for Hamtramck’s Cosmos.

A series of injuries to key players, and some missed first half scoring opportunities, resulted in a 35-6 loss to Macomb Lutheran Westland last Friday.

Hamtramck’s offense moved the ball efficiently throughout the first half, but was unable to capitalize until Senior Deantre Teat scored on a 72-yard touchdown catch just before the break.

The Cosmos were unable to find the end zone after that.

“This one really just got away from us,” said Leo Wells, Hamtramck’s head football coach. “We probably should’ve done more in the first half, but we let some opportunities slip through our fingers.”

The second half was filled with misfortune for the Cosmos.

Junior wide receiver and defensive back Wontay Jackson, who had more than 150 rushing yards and two touchdowns for the Cosmos the previous week, left the game with an ankle injury.

Hamtramck also lost Junior running back Kevin Bell to injury, along with a pair of starting offensive linemen.
With only 17 players dressed for the game, Wells said the injuries were difficult to overcome.

“We aren’t a deep team,” he said. “We had about 10 guys who played every minute, so by the end we were pretty banged up.”

Hamtramck’s defense held its opponent to just one first half touchdown but, following the injuries, Westland was able to score 28 points after the break.

The loss drops the Cosmos to 2-5 overall, with two games remaining.

Hamtramck plays its final home game of the season this Friday, Oct. 14 at Keyworth Stadium against Saginaw Buena Vista. Kickoff is scheduled for 7 p.m.

The season finale is Oct. 21 against Bradford Academy, with the game being played at Livonia Clarenceville High School.