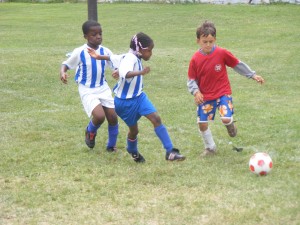 Every four years, the World Cup unites people from all over the world with the game of soccer.

This past summer in Hamtramck, the International Soccer Academy (ISA) accomplished the same feat every week.

Starting in July, the ISA began the 16th year of its free “Soccer-in-the-Park” program, with about 100 kids from the Hamtramck area, as well as around 200 kids from the west-side of Detroit, participating. Practices were held every Thursday, and inter-city games were played Saturdays on the west-side and Sundays in Hamtramck.

In addition to regular league championships, the culmination of the season is the annual three-on-three tournament dubbed the “Hamtramck International Cup,” which was held recently at Veterans Memorial Park. The round-robin competition featured 26 teams of kids with ages ranging from 6 to 16. The players represented over a half-dozen nationalities from four continents.

A total of 84 games were played over the two-day event, which cost participants just $6 and included a trophy for all who played. Even those not able to afford the fee were allowed to play.

“It’s about the game,” said current ISA and former Hamtramck-area soccer coach Larry Mack, “we would never turn a kid away because of money.”

The affordability of the game is what makes it inherently and universally accessible. Unlike other sports that require expensive equipment, a game of soccer can be played with just a ball. And through the game many other fundamental life skills can be developed. It’s a realization that ISA founder and director Denise Henry came to back in 1993, when she started the program with just six kids.

“There are so many opportunities with soccer,” she said. “It can provide kids an outlet, keep them off the streets and give them something to look forward to–all in a fun and safe environment. The game teaches them to work with others and helps build

Brigitte Bauman, a parent-volunteer from the Detroit community, confirmed the benefits of the game and praised Henry’s dedication.

“When my son started he was overweight and had low self-esteem,” she said. “But through the program he gained confidence and got into shape. It’s rare to find an individual who cares as much about kids as Denise Henry, and what she does truly has a positive impact.”

In addition to providing benefits to players and parents, the ISA’s program also works to help improve the community as well. This year they brought in 10 cubic yards of dirt to fill-in uneven patches in Veterans Park, and next year they plan on planting grass to complete the resurfacing.

Many of the players who come up through the program often become contributing members to their community.

“I can’t tell you how many times I’ve been in a store and the person waiting on me was in our program,” says Henry. “And many of the referees came up through the program and continue to remain active in it.”

The referees certainly had their hands full during the three-on-three tournament. With four fields hosting six age brackets that played at least three games each, the action started Saturday around noon and went non-stop until 4 p.m., with championship play resuming at noon on Sunday.

The International Soccer Academy is a volunteer-based grassroots organization that seeks to bring an affordable soccer program to communities throughout the Detroit area. For more information or sponsorship opportunities contact Denise Henry at (248) 792-1316 or by e-mail at soccer@telemedtec.com.