Is the city putting in the effort to promote its main business district? 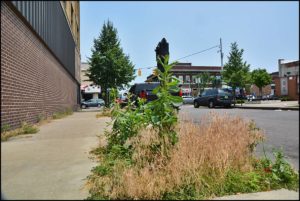 At the beginning of the summer, Jos. Campau was looking pretty weedy. That problem has been taken care of, but the issue brought attention to the city’s Downtown Development Authority and how its money is used.

By Charles Sercombe
For several weeks this summer, Jos. Campau was looking pretty weedy.
And no, we’re not talking about medical marijuana.
We’re talking about those pesky weeds we try to get rid of at home, and that by late August we give up on.
A group of high school city interns tackled the weed problem this summer, but that program is ending this coming week.
The issue drew attention to the Hamtramck Downtown Development Authority, which was created in the 1990s to help spur the economic development and promotion of the city’s main business district – which is the entire length of Jos. Campau.
The DDA has saved up about $120,000 from a tax on property owners, and some in the community are saying it’s time the group starts spending it.
On something.
Former city councilmember Robert Zwolak has been the lead proponent for dipping into those savings, which he calls a “kitty bank.”
“We’re not promoting the businesses that are paying into the DDA,” Zwolak said.
Zwolak wants to expand the DDA to also include Caniff and Conant.
“That way it will increase its revenue, and be able to promote all of the businesses in town,” he said.
DDA Vice Chairman Joan Bittner said the DDA does spend money. According to its budget, the DDA spends about $35,000 a year.
The DDA gives the Labor Day Festival $10,000 each year, and it also contributes to the Hamtramck Music Fest and the Paczki Run.
“All of these three things bring in a ton of people,” Bittner said. “That’s our mission.”
Bittner, who owns the Polish Art Center on Jos. Campau, added that if the DDA dips deeper into its savings, they “would go in a heartbeat. … We’ve been very good stewards.”
As for eliminating the weeds on Jos. Campau, that responsibility essentially falls on the city.
City Manager Kathy Angerer said last month that she is seeking prices from landscaping companies to get rid of the weeds, and for other maintenance issues.
We reached out for comment on whether a company had been hired, but Angerer did not respond.
Another maintenance issue that came up was the condition of the tree grates on the side streets along Jos. Campau.
Many of the grates have lifted up over time, posing a tripping hazards to pedestrians. Only those grates that no longer surround a tree – many of the trees have died or been cut down – will be removed. The spaces will then be cemented over.
Aug. 16, 2019

2 Responses to Is the city putting in the effort to promote its main business district?