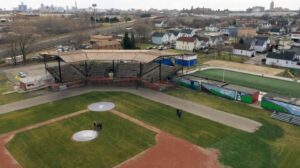 A Wayne County grant for over $800,000 will allow renovation of Hamtramck’s historic baseball stadium to move ahead. Work is expected to be completed by the end of the year. Photo by Jenny Risher

By Alan Madlane
Hamtramck’s baseball lovers and fans just hit the jackpot.
The Wayne County Commission approved an $850,000 grant toward the renovation of historic Hamtramck Stadium, one of only five existing former Negro League ballparks.
“Hamtramck Stadium is hallowed ground, essential to both Black history and baseball history,” said Wayne County Executive Warren C. Evans in a county press release. “I am thrilled that we are restoring Hamtramck Stadium to its former glory so that the next generation of Hamtramck and Detroit young people can learn to love this game on the same field where legends like Turkey Stearnes, Satchel Paige, and Josh Gibson once roamed.”
The rest of the money for the in-total $2.6 million project has also been spoken for, via a combination of funds partially from the Friends of Historic Hamtramck Stadium and the Hamtramck Parks Conservancy, but in larger part from other more high-profile, diverse sources, according to the county press release.
These include: The Detroit Tigers Foundation – which is one of the Ilitch Charities; the Ralph C. Wilson Jr. Foundation; the Kresge Foundation; the Michigan Municipal League Foundation; and perhaps most impressive of all, from an African American Civil Rights Grant of the National Park Service/Department of the Interior.
The Detroit Tigers annually celebrate Negro Leagues Weekend, paying tribute to the contributions of the Negro Leagues and African Americans to the game of baseball. This season’s recognition will take place this weekend at Comerica Park.
The Ralph C. Wilson, Jr. Foundation has also been financially supportive of the renovation of Keyworth Stadium and Veterans Park.
“The renovation of Hamtramck Stadium is a huge win for the youth and families of Hamtramck and broader metro Detroit community to have a safe and accessible space to play and gather,” said Jim Boyle, VP of program & communications of the Wilson Foundation.
Work on the project is slated to start soon, and is expected to be finished by year’s end. The renovations will include installing a new roof above the grandstand, restoring the seating and the brick exterior, and installing accessible seating.
“We are proud to have the support of so many committed partners who are contributing to the restoration of historic Hamtramck Stadium. This work will both honor the site’s history as one of only five remaining Negro Leagues home fields still standing and gives new life to the stadium as was prioritized by the community in the Hamtramck Recreation District Plan,” said David Palmer, Interim Executive Director of the Hamtramck Parks Conservancy, in the Wayne County press release.
“Reactivating this critical space in the Hamtramck Recreation District will serve the community for years to come, and provide an important stop on the new Joe Louis Greenway where all visitors can learn about our shared experiences and history.”
The stadium was built by John A. Roesink and opened in 1930. It was home to what was called at the time the Negro League. That was an era when Blacks were not permitted to play in the all-white Major Leagues.
The stadium was home to the Detroit Stars, which featured many legendary players, including Detroit’s own Norman Thomas “Turkey” Stearnes.
As well as hosting those many historic games, the stadium has also hosted a 1934 football game between predominantly Black colleges Wilberforce University located in Wilberforce, Ohio  and West Virginia State University; has been bought by the City of Hamtramck in 1940, and renovated in 1941 (along with the rest of Veterans Park, wherein it stands); has had buildings added, including a concession stand, in 1955; has seen a local Little League champion crowned on its home turf in 1959; and has been renovated or expanded again at least twice, in 1973 and 1976.
Eventually, though, the stadium fell into disrepair, and there were talks of tearing it down every once and awhile.
But a game-changer occurred when the stadium’s historical significance was discovered several years ago, thanks to the research of the Friends of Historic Hamtramck Stadium’s Gary Gillette and some residents of Hamtramck.
“The history of Hamtramck Stadium and the Negro Leagues is an integral part of the history of both Detroit and Hamtramck, and the rehabilitation of the grandstand will make that history accessible,” said Gillette in the county press release.
Hamtramck Stadium was added to the National Register of Historic Places, almost a decade ago, in 2012.
While restoration of the stadium has progressed, a group of volunteers called the Hamtramck Stadium Grounds Crew has been maintaining the new field that was installed last year and this year, and has hosted vintage baseball games at the site.
Which brings us ‘round to the great news of the day: that this noble and storied stadium will, too, come phoenix-like out of its own ash heap, and so will the city be the better for it, just in potential tourism alone.
Soon the aged beauty will get the full facelift it so badly needs.
Posted July 30, 2021