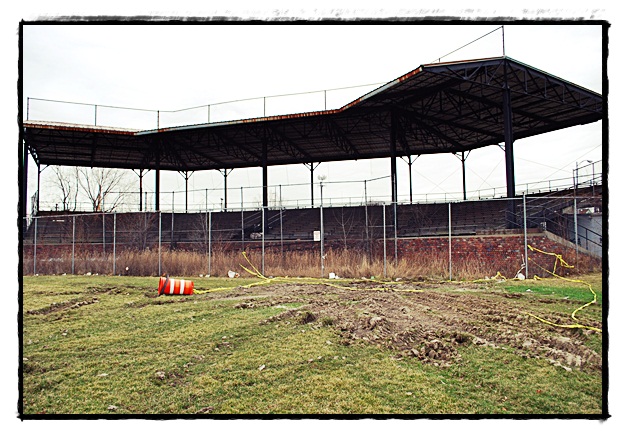 Hamtramck’s old baseball stadium has seen better days, but now that it’s been designated as a historical place, there could be funding sources the city can tap into to upgrade the park.

Or at least, a little more recognized for being so.

That’s because Hamtramck Stadium just made its way onto the National Register of Historic Places. All thanks to the efforts of a few caring local folk.

Binno Savage said that the whole process actually got rolling before she was involved. Perrotta, a former Review writer who still contributes articles and proofreading to this paper, supplied a bit of the early timeline.

“The impetus for the whole project was actually an article that appeared in The Review,” he remembers. “It went along the lines of, ‘Should the city build it (the stadium) back up, or tear it down?’.

That original article, along with a number of others, appears on the website www.hamtramckstadium.org, and was in response to the city’s in-process Master Plan discussions of early 2010.

“We were contacted by Scott Collins (a plan commission member), who had heard the city’s debate about possibly tearing the structure down.

“He said that the stadium was still in pretty good shape, that it wouldn’t take much to fix it back up,” Perrotta continued.

“After another article or two, Gary Gillette (a Detroiter who once wrote for ESPN Insider) contacted the paper. He was the one who knew the history of how the Negro Leagues had played there.”

Gillette quickly became a champion of the project, coming to a council meeting armed with facts, maps and the like.

What was needed was to prove that the grandstands were original, which – if it were the case – would make the stadium one of only five remaining where the Negro Leagues had actually played.

A Grandstands Committee was formed, and somewhere along the way Binno Savage came aboard. Employed at a Detroit-based design firm, she knew some specifics about the Historical Places designation procedure, such as the need for the historical significance to be elaborated upon, and for the site to be accurately physically described, including photos.

“That’s where the little bit of expenses came into play,” Binno Savage said. “I’d say about $200 was spent taking the photographs, FedExing materials to Washington D. C., and so on.”

The potentials that could be realized by having the stadium bestowed with the important federal designation were enormous. These included the ability to then apply for federal and other monies, to help offset or even cover renovation costs; the appeal to innumerable baseball and black history buffs, and the resultant cultural tourism benefits; and even the possibility of the stadium being made available for what was then a burgeoning film industry.

The 21-page federal form, which goes is processed through the National Park Service of the Department of the Interior, was finally submitted about six weeks ago.

“The overall process was fairly lengthy, but that’s because we were doing this on a volunteer basis, and everyone had the other parts of their lives to deal with,” said Perrotta. According to Binno Savage, Perrotta helped raise the funds by organizing soup fundraiser events. The Hamtramck Community Initiative pitched in with this process.

Six weeks had passed. Binno Savage made a phone call on Monday, inquiring about the application package’s status.

A day later, the word came back via a return call from the government, and it was as glorious a sound as the crack of the bat on the playing field:

Hamtramck Stadium was a winner.

Now, the little grandstand, so soaked in its legendary baseball history, is set up for a different sort of fun.