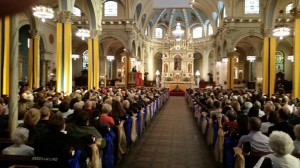 Our Lady Queen of Apostles will have a surge of visitors this Sunday when the “Mass Mob” movement returns to Hamtramck.

By Mike Murphy
Special to The Review
Catholic Mass Mob Organizers are hoping to work their magic in Hamtramck once again this Sunday at Our Lady Queen of Apostles Church, and so are representatives of the church.
“The other (Mass Mob) events have drawn from 1,500 to 2,000 people,” said Our Lady Queen of Apostles church secretary Carrie Miesik. “We’re expecting a lot of people from the suburbs who used to attend the grade school, and their family members.”
Mass Mob liaison Our Lady of Apostles Council Member Debbie Warren said that she will be overwhelmed if an overflow crowd turns out Sunday at the Church, which has the capacity of just over 800.
“I am thinking about 600 to 800,” Warren said. “It’s like throwing a party and not knowing who is going to come.”
The mass for the mob is set to begin at noon, with refreshments to follow in the church’s activities building and its convent. The church will remain open following the Mass for those who want to get a closer look, shoot a photograph or two, or participate in a Q&A session planned to follow Mass.
Really, though, there is little magic involved in the Mass Mob Movement, which has glommed on to the benefits of social media and been the subject of quite a bit of publicity over the past several months.
The Detroit Mass Mob Movement’s presence on Facebook is pretty phenomenal. There is also a website and friends on Twitter that have been frequently tweeting about the Movement. The Movement has not only attracted the attention of Detroit’s mainstream media outlets, it has also shown up on the front page of the New York Times and in the Huffington Post.
In terms of mobilizing people locally, Facebook has really played a big role, according to Warren. Nearly 4,500 people are following the Detroit Mass Mob page on Facebook and the Catholic Mass Mob of Detroit page boasts just over 2,000 members.
“It’s gotten to be quite a big following,” Warren said. “Facebook has allowed us to get to people we wouldn’t otherwise reach very quickly. I was really surprised at how many people were excited about this event.”
Mass Mobs, which serve multiple purposes including bringing young  Catholics back to churches attended by their ancestors and attracting much needed donations to cash-strapped churches that are sometimes dodging looming closures.
Although Our Lady Queen of Apostles does not plan to close its doors anytime soon, Warren said, organizers of the event are hoping it brings a much needed financial boost to the church.
Mass Mob organizers estimate that the average donation per person is $15.
Warren also sees this as an opportunity to expose younger, suburban Poles to their roots.
“Our parish is Polish in its roots, and still has a thriving Polish population today, including a Polish pastor,” Warren said.
The Mass Mob Movement has been associated primarily with rust belt cities in the U.S like Detroit, Buffalo, and Cleveland, but it is spreading to other cities with deteriorating urban centers and sparsely attended churches, like New Orleans.
“People have been very generous with monetary contributions at these events,” Warren said. “They know that parishes that sponsor these events don’t normally have a full house. These older churches are very expensive to maintain, and we will be very grateful for donations.”
The Mass Mob event will be held this Sunday. Nov. 16, at the noon Mass, but the church will be open to visitors at about 10:45 a.m., and shortly after the morning Mass ends, for those who want to explore the church and its décor prior to mass.
Warren is encouraging visitors to bring cameras to the event, especially to photograph the restored mosaics on the main and side alters. Organizers are also requesting that churchgoers bring a can or two of food to donate to the church’s soup kitchen, which serves about 40 people on a regular basis.
Boxes to put the food in will be located near the entrance of the church and additional parking for the event can be found behind the PNA Hall, located on Conant between Belmont and Trowbridge Streets, two blocks south of the church, which is located at 3851 Prescott Street.