Jos. Campau building is turned over to the city for development 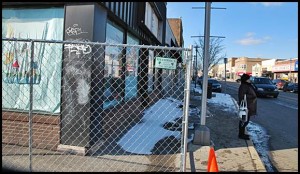 After commanding a price of over $200,000 in the Wayne County Tax Foreclosure Auction, the building at 10201 Jos. Campau was never paid for. The building is now owned by the city, which has erected a fence around it to protect pedestrians from the potential of falling debris.

You may have noticed some new activity at the corner of Jos. Campau and Belmont recently. Unfortunately, it’s only precautionary.

In January, the Department of Public Services a fence put up a fence around the four-story building at the northwest corner to protect people from the potential of falling debris.  The mortar on the southeast corner of the building is expanding and may pose a future problem.

“Nothing has fallen yet, but we wanted to be proactive,” said Community and Economic Director Jason Friedmann.

When Friedmann says “we” he means the city, which is primed to take ownership of the building in the next few days. Though the building was listed in the last Wayne County Tax Foreclosure Auction, the winning bidder failed to make a payment before the deadline.

After the first-highest bidder was disqualified, it was offered to the next highest bidder. That bidder declined, so it was then transferred to the city. Considering that the building sold in the auction for over $200,000, the city walked away with a steal.

However, before the building can be utilized it must first be rehabilitated. The Community & Economic Development Department is currently working on a strategy to redevelop the building, and there are already several incentives — including the Facade Improvement Grant and the Second Story Rehab Grant, among others — tied to the building.

“There are a lot of options on what we can do with the building,” says Friedmann. “We’d like to figure out what will work best.”