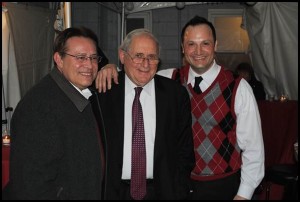 The annual Review Christmas party has come and gone – but what a memorable event it was!

Thanks to a lot of hard work, our humble building looked warm and inviting on the recent evening of Saturday, December 8, and it was further illuminated by the presence of some very special guests, including U. S. Senator Carl Levin and his wife Barbara, and U.S. Congressman Gary Peters. Of course, many of our own local dignitaries, customers and friends joined in the fun as well.

What began a few short years ago as a simple statement of appreciation to our many friends, advertisers and supporters has quickly grown into something of a “must-attend,” and we can only hope it will continue to prove to be so.

I feel that it is important to try to keep the Hamtramck Christmas tradition alive through the hosting of this festive event. Where some would try to destroy the warmth of the season, through such heinous and despicable acts as the one perpetrated in Connecticut this past Friday, it now feels necessary to show that the vast majority of people understand it to be a time of forgiveness, of renewing old acquaintances and cementing current ones, of gentle reflection and warm spirit shared with friends and family amid a celebration of good food and drink.

A time to focus on what is truly important in life, and on the work yet to be done in the coming year(s) ahead.

The senator complimented The Review for the outstanding work he felt the paper does for the City of Hamtramck.

“I enjoy, and support, The Review newspaper, and I remember (the city’s previous newspaper) The Citizen, too. Hamtramck needs a newspaper; Hamtramck is an up-and-coming city,” Levin remarked.

He went on to add: “I care about this city, and want it to succeed. Really, there are two up-and-coming cities: Hamtramck and Detroit.”

As the senator and his wife mingled, they enjoyed the evening’s cuisine, provided by local Hamtramck favorites Maine Street and Srodek’s.

U. S. Congressman Gary Peters also attended, conversing likewise with many of the guests, and enjoying the pierogis. Congressman Peters also expressed both his deep respect, and concern for the continued future of Hamtramck, and promised to work diligently on behalf of the city’s interests.

Over the course of the evening, many guests enjoyed the festive atmosphere, which also featured heated tents and music in the outdoor courtyard.

As Senator Levin so eloquently noted, Hamtramck is, once again, an up-and-coming city. We hope that our annual tradition of throwing a Christmas party, in appreciation of this city – of all it was, and all it can still become – can play some small role in fulfilling the senator’s faith-full words.