Keeping a legend, and history, alive in Hamtramck 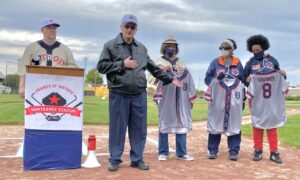 By Dave Mesrey
Special to the Review
Last month, the City of Hamtramck and the Friends of Historic Hamtramck Stadium teamed up to give the city’s newly renovated baseball diamond at the former home of the Negro League Detroit Stars a new name: Norman “Turkey” Stearnes Field.
Stearnes, the Hall of Fame outfielder who starred for the Stars in the 1930s at the old ballpark on Dan St., helped pave the way for Jackie Robinson to break Major League Baseball’s color line in 1947.

Born in 1901 in Nashville, Tennessee, Stearnes remained in Detroit after his baseball career, and worked for Ford Motor Company for 27 years at the Rouge plant in Dearborn. He died in 1979, and was posthumously inducted into the National Baseball Hall of Fame in 2000.
On Sept. 29, the City and the Friends honored the Stearnes family in a moving dedication ceremony in front of the ballpark’s dilapidated 1930 grandstand. Now with its brand-new grass infield and gorgeously restored basepaths, Hamtramck Stadium is one step closer to a rebirth.

“A generation of Negro League players — Turkey Stearnes and all his teammates — played here … and leave their spirits here,” said Hamtramck Mayor Karen Majewski.
“We see the vision, and how many people and how many organizations have been inspired by that. I hope to see you all here in the spring, when the sports clinics start. … The field is absolutely beautiful, and it’s a beautiful, beautiful thing that you’re all here.”
Longtime baseball historian Gary Gillette, co-founder and chairman of the Friends of Historic Hamtramck Stadium, helped put the occasion in perspective.

“The past is what brought us here, and the past is what makes this special,” he said, “but what’s gonna make this place come alive are the youth of today. We’re doing this for the children of Hamtramck today and tomorrow and next year and the following year.” 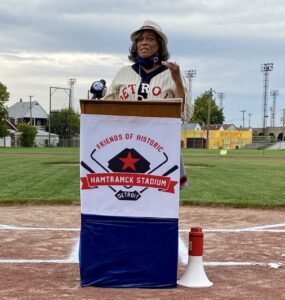 Turkey Stearnes’ family — represented by his daughters, Joyce Stearnes Thompson and Rosilyn Stearnes-Brown, and his granddaughter, Vanessa Ivy Rose — was presented with custom commemorative baseball jerseys designed by retired automotive designer Vince Geraci.
Geraci’s unique design combines the Old English D of the Tigers’ home jerseys with elements of the classic Detroit Stars uniform.
“For the first time in history,” he said, “the wide blue band and the Old English D are together as teammates.”

Geraci said he hopes his design can someday serve as an alternate away jersey for the Tigers to honor the Detroit Stars and Turkey Stearnes.
Longtime baseball coach Mike Wilson, president of the Friends of Historic Hamtramck Stadium, was thrilled to be back in the city of his youth.

“I’ve come full circle from my roots in Hamtramck,” he said, “and I feel fortunate to be a part of this valuable project.”
Hamtramck Public Schools superintendent Jaleelah Ahmed said that Hamtramck Stadium serves as a symbol of resilience, sportsmanship and unity centered on the love of baseball.
“Through the work of collective efforts, the restoration process has brought back life to this historic site,” Ahmed said. “All involved in preserving and protecting this site have given more opportunities for talent to grow, for families to create memories, and for our city to thrive.”

“Old places indeed have souls,” she added. “Let’s continue to preserve the past for the future.”
The event was a transformative one for Rose, who called it “anti-racism work in action.”
“The naming of the field symbolizes people from different backgrounds coming together to uphold unity, love, justice and truth,” she said. “In Africa, naming is a form of honoring and empowerment. The field being named after Grandpa Turkey truly is justice for all the Negro Leaguers who were worthy of being seen, valued and recognized as contributors to America’s favorite pastime.”

Stearnes’ daughter Joyce said that, while this year should’ve seen a bigger celebration of the Negro Leagues’ centennial anniversary, 2020 instead has been filled with hatred, tragedy and racism.
“But today,” she said, “we can erase that from our minds, and fill our hearts with love and joy.”
Stearnes’ daughter Rosilyn said she’s thrilled to see the legacy of the Negro Leaguers continue at Hamtramck Stadium.
“I just want to express my heartfelt gratitude for all the things everybody has done in honor of my dad,” she said, choking back tears.
“Please encourage your kids to get active in baseball. … Thank you from the bottom of my heart.”

Tom Derry, founder of the volunteer Hamtramck Stadium Grounds Crew, has long been a fan of the Detroit Stars, and even wore a classic Stars jersey on his wedding day at the old Tiger Stadium site in 2014.

“I want to say what a thrill it is to be standing right here on this spot, where 90 years ago Josh Gibson played catcher for the Homestead Grays,” Derry said. “The history here at Hamtramck Stadium just amazes me every time I come out here.
“This field means a lot to us,” he added. “We’re excited not only to preserve baseball history, but also to help the community — because this isn’t just a baseball field, but a field for everybody to enjoy. We’re excited to be here, and we hope to maintain this field for a long time to come.”

Renovation of the historic grandstand is expected to begin in 2021.

(Dave Mesrey is a founding member of the Hamtramck Stadium Grounds Crew, and is a Detroit-based writer.)
Posted Oct. 16, 2020