Koscuizsko Cougars claw their way to the top 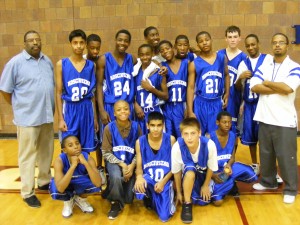 By Ian Perrotta
Review Staffwriter
This may have been the first year Koscuizsko Middle School played basketball in its new league, but that didn’t stop the Cougars from leaving a lasting impression. After going 10-1 for the season, the team was crowned champions of the Dearborn League.
The team was undefeated until their final game against Allen Academy, which they lost 51-29. Allen Academy came out with full-court pressure in the first half, limiting Koscuizsko’s offense and leaving them down by 20 points at halftime. Though the Cougars came out confident and traded baskets with Allen Academy throughout the second half, the much bigger Wildcats proved to be too much.
“It was a disappointing loss,” said Head Coach Phillip Anderson, “but it was good for the boys to play against much better competition. All-in-all it was a great season, finishing 10-1.”
While the final game resulted in a loss, the rest of the season was full of wins. The top contributors for the Cougars included Dominique Wilson, who averaged 15 points and 10 rebounds per game; Haris Causivic, who averaged 10 points and 12 rebounds per game; and Jerron Herron, who averaged 10 points and 10 rebounds per game after joining the team midseason.
Other standouts were Emir Musanovic and Ryan Walker at the guard positions. Both averaged six steals per game, and Musanovic averaged seven assists per game as well. And while most of the team will graduate this year, Coach Anderson says he is looking forward to next year when he expects Aaron Boyer to help lead a new crop of players to another championship.