Labor Day Festival will be rocking 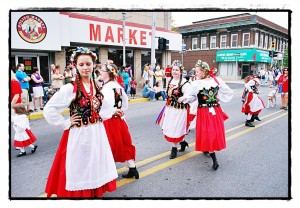 It’s almost time for Hamtramck to reap the fruits of the festival committee’s labor. The Hamtramck Labor Day Festival is just two weeks away and it’s shaping up to be one for the books.

For anyone who has been living under a rock for the past few months, earlier this summer there was a distinct chance that this year’s celebration would be canceled. That was when the call went out for regular Hamtramckans to form a committee and help save the festival.

That call was answered by a group of enthusiastic young people led by residents Kathleen Bittner and Rachel Srodek, who to date have raised over $20,000 for this year’s festival through individual and corporate donations and sponsorships, an old school road rally and an awesome fundraiser at the office of The Review.

“Why not?” said Bittner when asked why she agreed to help with the festival’s organization. “Everyone’s always saying ‘somebody should do this’ but no one ever really does anything, so I figured I would just do something. And you can’t have Labor Day in Hamtramck without the festival!”

The money raised for the festival will be used for both new and previously existing expenses. As usual, there are costs associated with putting on performances and bringing in the carnival rides, as well as the little details that most people don’t notice like maintenance and security. New expenditures include showers for a campsite, among others.

Before you check your eyes, hold on a just minute – you read it right: a campsite, and its name is Camptramck. It’s just one of many things that will make this year’s festival the most fun and unique yet. The campsite will be located at Veterans Park and will be patrolled by security guards for the duration of the festival. Tickets are $30 for the weekend, $10 for a single night or just $5 to hang out. Considering the city has made a special allowance permitting alcohol at the site, it should be a pretty good time.

Before you hit the campsite Saturday and Sunday nights, you’ll have an opportunity to take part in a Hamtramck tradition – a good old-fashioned pub crawl. But the big difference between this crawl and a normal Friday night in Hamtramck will be the addition of The Night Move, an eco-friendly passenger bus that will be travelling throughout the city, stopping at bars, the festival site and the campsite.

Just don’t drink so much that you don’t wake up in the morning. On Sunday morning there will be the usual Polka Mass with Big Daddy Lachowski as well as the Dudek-sponsored pierogi eating contest. During the day you’ll also have a chance to peruse the goods at the festival’s Arts and Antiques Fair. Given this year’s festival motto of “homegrown,” you should be able to find some good deals from some great local artists.

The big day for the festival is Monday. In addition to the regularly scheduled Polish Day Parade, this year features a special treat: the return of the Hamtramck Yacht Race. Before the parade begins, teams of patrons from a number of local bars will compete in a quirky race that has homemade pushcarts shaped like boats racing down Jos. Campau. And speaking of races, anyone up for a Labor Day run? There will also be one mile and five kilometer Fun Runs.

If the rest of the weekend’s activities are too exhausting to participate in, you can always just check out the entertainment. The musical and comedic line-ups this year contains some of the biggest names to come out of Hamtramck, including hometown rocker Mitch Ryder and Harry Perry, a world-famous street performer/comedian.

Of course, Hamtramck favorites Danny D and the Polish Muslims will also be there, along with some more obscure yet extremely talented bands like The Fresh Tones. Even without the three dollar beers that will be available at the festival, they’re a duo worth listening to. (Editor’s note: Uh … Ian Perrott’s brother is one half of the Fresh Tones. Just saying.)

For what’s supposed to be a relaxing end to a long summer, this year’s Labor Day looks like it’s going to be high-energy and pretty exciting. Afterward, it looks like Hamtramck is going to need a vacation.

Guess we’ll just have to wait until Thanksgiving.