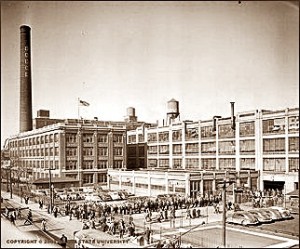 The Birth and Death of Dodge Main

In June 1910, John and Horace Dodge began construction of a factory on a
piece of property in the southeast corner of the dusty little village of
Hamtramck.

Within 10 years, their factory would transform Hamtramck into a
major industrial city with a population that skyrocketed from 3,500 to
48,000.

For seven decades Dodge Main was the lifeblood of Hamtramck. It provided
tens of thousands of jobs and generated millions of dollars in tax revenue.
At its peak, Dodge Main was one of the largest factories in the world.

Virtually nothing remains of it today. In 1981, the plant, which had closed
the year before, was demolished to make room for the GM Poletown plant.
But the memory of Dodge Main lives on and it will be commemorated with a
slide presentation at 7 p.m. on Thursday, June 17, at the Hamtramck Public
Library. This presentation will take you right into the plant, from its
earliest days, through its massive growth to its death and final
destruction. Some of these photos have never before been shown publicly.

The presentation will be done by Greg Kowalski, chairman of the Hamtramck
Historical Commission, who witnessed the destruction of Dodge Main
first-hand and photographed its demolition from inside the plant.
The presentation is free. Refreshments will be served. The Hamtramck
Public Library is at 2360 Caniff.