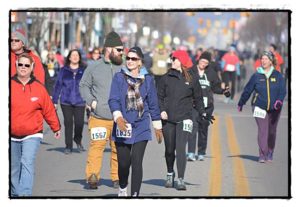 The Paczki Day festivities kick off this Saturday morning with a 5K run that winds through the city’s neighborhoods.

Paczki Day is going to be bitter cold this Tuesday.
According to weather forecasts, the high on Tuesday will be about 20 degrees and the low going down to 6. But when you factor in the windchill, we’re looking at minus degrees.
For those coming here to purchase paczki, better dress extra warm because the wait to get your order can last as long as a couple of hours.

By Charles Sercombe
This coming week the stars are aligning for Hamtramck.
Where, oh where, to start?
On Saturday (March 2), at 10 a.m., the annual 5K Paczki Run, hosted by Tour de Troit, kicks off the festive week.
There’s an added attraction. Gov. Gretchen Whitmer will participate in the run. It’s part of her pledge, according to a press release, to run 60K-worth in various runs throughout the state in one year.
Welcome to Hamtramck, governor, and come back soon.
After Saturday’s run, she’ll be down to 55K left to tackle.
A few thousand people show up for the run, which takes folks through the city’s neighborhoods. The run starts on Jos. Campau, just south of Holbrook. It costs $40 to participate (be sure to sign up at 9 a.m.).
Spoiler alert: The weather on Saturday is supposed to be a mix of snow and sleet. However, bad weather has not stopped people from coming out in the past. In fact, it adds to the fun.
After the run, the fun moves inside a heated tent next to where the 5K run takes place, at the Hamtramck Town Center shopping strip at Jos. Campau and Hanley.
The tent party features a free sampling of local paczki and live polka music. And if we’re lucky, Mayor Karen Majewski will be on hand to dazzle us with her folk-dancing skills.
(This is not fake news, folks. The mayor is an amazing dancer.) 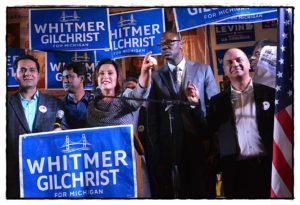 Gov. Gretchen Whitmer, seen here at a Hamtramck campaign rally held last October, will be participating in the run.

After two days’ rest, the party heats up on Tuesday (March 5) – Hamtramck’s own holiday, Paczki Day.
What can we say at this point? You know the drill. The city’s bakeries will be packed, starting the night before and then all through the day.
While you can buy paczki anywhere these days, there is only one place to get the real thing, and that’s in Hamtramck.
Our bars will also be open early, to make this our own Mardi Gras party.
Most of the bars have live bands, and of course the city’s favorite party band, The Polish Muslims, will once again play three venues through the day. (Check their Facebook page for details.)
Note to fans: The Polish Muslims will not be kicking off the day at the New Dodge Lounge, and instead are relocating to Ant Hall on Caniff, next to the public library.
Some of the bars get pretty creative.
Over at the Motor City Sports Bar & Grill (9122 Jos. Campau) they are serving up a paczki burger. Yes, you read that right: It’s a paczki split in two, with a burger in the middle.
You can make ours a cheeseburger, please, no Pepsi.
Over at Small’s Bar (at the corner of Caniff and Conant), they invented a thing called a paczki bomb. As you might guess, it’s filled with booze.
Now, that makes Jell-O shots look as lame as they are.
If you can stomach it, PLAV Post 10, located at 11824 Jos. Campau, will once again host a paczki eating contest. It starts at noon, and for a grueling 15 minutes you can watch a half dozen or so folks belly up and scarf down as many paczki as they can.
Be forewarned though: You cannot unsee what you have once seen.
OK, so that takes care of Saturday and Tuesday.
The party continues once again, starting Thursday, with the return of the Hamtramck Music Fest.
As you may have read in last week’s Review, there will be over 200 bands crammed into 24 venues.
We are talking cafes, halls, bars, shops, and even the Hamtramck Public Library.
Heck, who knows, maybe someone will open up their living room.
For a mere $15, you can get into all of these places all weekend long (March 7-9) and see a mind-blowing offering of bands, DJs, musicians, performance artists – you name it.
Our favorite thing to do is just wing it. Don’t map out anything, just go place-to-place and see what turns up.
We will buy you a paczki burger if you are not impressed, thrilled, delighted – whatever – with what you experience.
We’ll have more on this next week.
In the meantime, check out the festival’s Facebook page for details, and the back page of this issue for their advertisement.

One Response to Let the Paczki Day festivities begin: Hamtramck will be party city