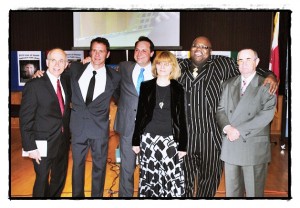 Here’s something regarding the library that you don’t have to keep quiet about: Last Thursday (Nov. 11) the Hamtramck Public Library celebrated its 92nd Anniversary with a commemorative ceremony at the Polish National Alliance (PNA) Banquet Hall on Caniff.

The evening kicked off with Katarina Quain performing various musical selections on the piano, and was continued by a brief welcome by Library Board President Raymond Bittner. After that the singing of the National Anthem was led by local students Kaitlyn Hill, Kamryn Hill and Daisha Jackson, leading into a dinner service provided by Polonia Restaurant.

Once dinner was finished it was time for the main event – the induction of nominees into the Library Hall of Honor. This year there were four recipients of the award, each with their own unique reason for being nominated. And thanks to the volunteer work of Gregory Kirchner, a video of each person provided their background and reason for nomination.

First up for induction was Titus Walters, the School Board President for the Hamtramck Public Schools District. Walters, a 1981 graduate of Hamtramck High, was nominated for his continual dedication to education in Hamtramck as well as for his entrepreneurial ambition concerning his “Flavor” restaurant endeavor.

The second inductee of the night was John Ulaj, the publisher of this newspaper. Because of his investment in the community through both The Hamtramck Review and his real estate business Villa Realty, Ulaj was a natural choice for induction into the Hall of Fame. His support of the local economy, participation in local politics, and especially his generosity were all contributing factors to his nomination.

Despite being hardly recognizable wearing a suit and with his hair cut, Shannon Lowell was the third inductee of the night. Lowell, the co-owner of Café 1923, has been a fixture in Hamtramck for years, serving on the Beautification Commission as well as being involved in numerous other projects. In addition to his coffee shop, Lowell also owns Donovan’s Pub in Southwest Detroit.

Last but not least was Jerzy Dabrowski, the fourth inductee of the night. As the only member of the Library Board who holds a librarian’s degree, Dabrowski not only worked for over 30 years as a librarian in the Detroit Library System, but also began volunteering at the Hamtramck Library in 1974 as well. A resident of the city for over 50 years, Dabrowski can still be found volunteering at the library.

After the induction of the new members into the Hall of Fame, the library’s current volunteers were also recognized for their work. Library Director Tamara Sochacka then provided some brief closing remarks, a drawing of door prizes was held, and a benediction was given by the Reverend Bogdan Bilosz.

“We started doing this about 10 years ago when we realized that there were so many people helping and willing to help the library,” says Sochacka. “And when we realized we wouldn’t be able to function without volunteers we knew we had to recognize them.”